Coffs Harbour trio hoping to cash in on home track

It’s seemingly taken an eternity to dry out after the coastal deluge, and the weather gods still need to be kind, but a trio of locally-trained gallopers are champing at the bit to strike at Tuesday’s feature Coffs Harbour meeting.

Honest five-year-old Arctic Wolf, trained on the track by Brett Dodson, is eyeing off a long-awaited fourth career win coming back in grade well into his current preparation. 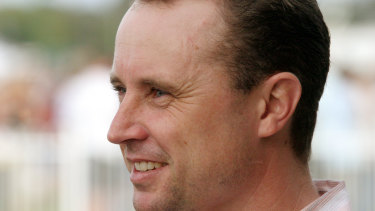 Brett Dodson is chasing success at Coffs Harbour on Tuesday.Credit:Fairfax

The gelded son of late great Group 1 winner and prolific wet track sire Sebring hasn’t had much go his way in four runs this year against much deeper opposition.

Yet, he had worked so well off a six-month spell, the stable resumed him in strong Highway company at Randwick two months ago, but he finished well down the track.

Since then, Arctic Wolf has found the line late in two higher Benchmark country races before tackling Class 3 metropolitan company at Eagle Farm 17 days ago when he disappointed after tracking the speed from an inside draw.

So, connections have decided to take a step back and return home where he can add a second win from only four starts on heavy-rated tracks.

Standing in his way, though, is tough Wyong four-year-old McNair who comes off a strong closing fourth-up effort at Scone, and also relishes wet ground.

Later on the card, promising Bel Esprit three-year-old Bow is set to open his account for local trainer Donna Grisedale in a modest Maiden Hcp over the flying 810m.

Behind two close-up third placings in February to start his career, Bow has been given a freshen-up and looks beautifully placed dropping in weight after the claim, and with blinkers being added.

Amber Deluxe, a lightly raced and improving five-year-old by renowned wet track sire Delago Deluxe, has been given four weeks since a fighting first-up effort at Taree, beaten just over a length in a stronger race.

The stable has stepped him up more than 300m in journey, and she shapes as one of the better weighted runners on the program after the rider’s 2kg claim.