Star jockey Jamie Kah will find out on Friday if she will be sidelined until next year after the Victorian Racing Tribunal found her guilty of “wilfully” misleading the stewards over who was present at the infamous Mornington Airbnb house party last month.

Kah pleaded not guilty to a charge of providing false and misleading evidence to the stewards, but her argument fell on deaf ears with the tribunal dismissing her defence as “totally unbelievable”. 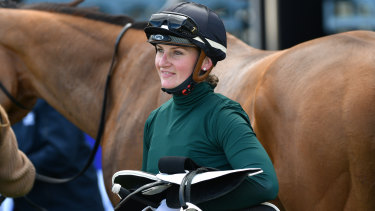 She is already serving a three-month ban for breaching Victoria’s COVID-19 regulations by hosting the illegal gathering at which four other jockeys – Mark Zahra, Ben Melham, Ethan Brown and Celine Gaudray – were present.

But Racing Victoria stewards now want the tribunal, having found her guilty of the second offence (brought about by her failure to tell them that Zahra had been present at the party), to impose a further two-month suspension to be served after her existing ban, as extra punishment.

If that is acceded to, Kah would be out of action until the end of January next year – a total of five months.

Kah’s lawyer, Damian Sheales, argued that she had already been publicly humiliated in the fallout from the scandal and could already be paying a “world record” fine of $1 million as a result of potential lost earnings through the current three-month ban, which has ruled her out of the lucrative spring racing carnival.

He urged the tribunal to show compassion when it delivers its verdict on Friday morning, saying that she had been “struggling mentally” when she had invited Gaudray over to the house.

“No one has been of greater benefit to the industry (in recent years) than Jamie Kah, what she has achieved, the positiveness and her commitment to fulfilling obligations to assist the industry. She is 25 and has carried it with grace and dignity,” Sheales declared.

“The penalty is spectacular. This is a world record penalty that she has taken on the chin.

“She has already missed out on the (winning) rides of the only two group 1 races this season, as she was booked to ride them both (Behemoth in the Memsie Stakes, and Incentivise in the Makybe Diva Stakes).

“They were both million dollar races, and without slings her percentage was $100,000.”

Sheales explained that, because of her current suspension, Kah could not now take the ride on pre-race Cox Plate favourite Zaaki and, he added “she had the ride on Incentivise in the Caulfield and Melbourne Cups, the raging favourite for both. If those three horses win … just on those three races alone and the two races already run and won, it is a million dollar penalty.

“She hasn’t bleated. Surely there comes a time when compassion…..enough is enough.

“Here is a girl who is struggling mentally, who carries the burden when she goes to work, who invites a friend over to be with her. It’s a penalty that most of us won’t earn in a decade.”

The stewards are, however, in no mood to show clemency.

They argue that unlike Zahra (who received an extra one-month ban with one-month suspended) and Gaudray (who got two weeks with six weeks suspended) on the lying to stewards charge, Kah has shown no remorse.

This, they say, is evidenced by the not guilty plea she entered.

RV stewards say that Kah’s repeated failure to come clean over all those who were at the gathering put the whole of the industry at risk, given the strict COVID protocols that have been put in place to keep it going during the months of lockdown.

Because she had not mentioned Zahra’s presence, he was able to escape detection until Saturday August 28, when he eventually admitted to stewards he had been present.

That meant that he had been able to ride at the Flemington jump outs on Friday, August 27 – an action which, stewards lawyer Raelene Sharp said, could have jeopardised the health and wellbeing of all who were present that morning and threatened the continuation of the industry.

Sharp said that, while Kah might have been struggling on the night of the party, there was no evidence that she was struggling the following day when she gave the “wilfully false” evidence to stewards.