Cameron Smith’s Olympics charge struck a major obstacle after a bizarre finish to a rain-interrupted second round as American ace Xander Schauffele and reluctant traveller Rory McIlroy shook up the event.

Smith, competing in the Games for the first time, was putting together the best round of the day before a two-hour delay for inclement weather cost the Queenslander all momentum at Kasumigaseki Country Club on Friday. 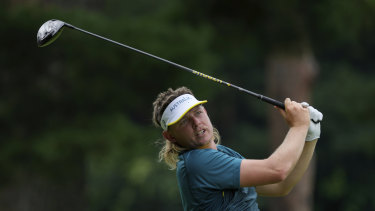 Cameron Smith en route to a four-under 67 in his second round.Credit:AP

He won’t want to relive the circumstances on the last again, pulling his approach shot left and watching it ricochet off an empty grandstand 50 metres back across the fairway and into water protecting the green. He eventually settled for a double bogey.

Smith (-4) had already made bogey on the first of his four remaining holes when he resumed play and then had further black marks on his card after the last, denting his hopes of a podium finish in his first Olympics.

Smith threw his replacement ball into the water after posting a four-under 67, which blighted a blemish-free first 14 holes which included six birdies.

“That was pretty unfortunate,” Smith said. “I was just trying to get it down there on the left and the rough caught the heel a little bit and it went a bit more left than I anticipated.

‘Progress today, but it would have been nice to finish on a bit of a higher note than that.’

“I felt like I did a lot of good stuff today and didn’t get the most out of my round and to finish like that is a bit crappy. Progress today, but it would have been nice to finish on a bit of a higher note than that.”

But the stars of the day were Schauffele and McIlroy, who openly admitted a fortnight ago after the Open he wasn’t looking forward to travelling to COVID-ravaged Tokyo for the Olympics, the second time golf has been played since its return to the Games format.

He said he would travel given the importance of the sport’s best players being at the Olympics to ensure golf remained as part of the Games.

Schauffele (-11) took a one-shot lead after a scintillating eight-under 63. 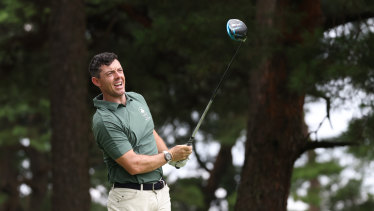 Rory McIlroy made a charge during the second round.Credit:Getty

McIlroy chose to represent Ireland rather than Great Britain, which traditionally includes Northern Ireland, which the former world No.1 represents in individual competition, and he’s firming for an Olympic medal.

The 32-year-old posted a five-under 66 after dropping a shot on the last. McIlroy (-7) trails Schauffele and Mexico’s Carlos Ortiz (-10), who has upstaged more fancied countryman Abraham Ancer.

Irishman and former British Open winner Shane Lowry was the day’s other big mover with a six-under 65 to join McIlroy inside the top five.

Australian Marc Leishman bombed out of contention after his lacklustre tournament continued in the second round.

There is no cut in the Olympic event, which was rocked earlier this week when world No.1 Jon Rahm and big-hitting American Bryson DeChambeau both withdrew after contracting COVID-19.