The year’s second major gets under way late on Thursday with Cameron Smith the pick of the Australians as he chases a maiden triumph in Oklahoma. Here’s everything you need to know.

WHEN IS THE PGA CHAMPIONSHIP?

The second major of the year will be held from late Thursday until Monday morning (AEST).

The PGA Championship will take place at Southern Hills in Tulsa. It will be the fifth time the Oklahoma course has hosted the tournament – the most of any venue. It also hosted the US Open in 1958, 1977 and 2001. Omen punters – Tiger Woods won the last PGA Championship at the course, back in 2007.

Fox Sports and Kayo will have live coverage from wire-to-wire, beginning on Thursday at 10pm and continuing at the same time Friday. Coverage of rounds three and four begins at 4am Sunday and Monday (all times AEST). 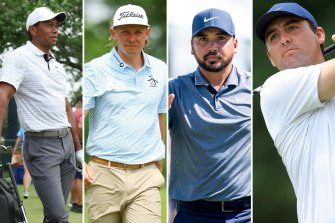 WHO IS THE DEFENDING CHAMPION?

Phil Mickelson’s stirring triumph last year made him the oldest major winner in history. The American won a second PGA Championship to go with his three Masters and 2013 British Open victories in the shadows of his 51st birthday. However, he won’t be attempting to defend his title. Mickelson has found himself embroiled in the controversy over Greg Norman’s Saudi Arabia-funded LIV Golf Series, skipped last month’s Masters and hasn’t played an event since February. Where was that? You guessed it – Saudi Arabia.

WHO IS IN THE AUSSIE CONTINGENT?

ARE WE IN WITH A SHOUT?

It would take a brave soul to bet against Smith turning in a career-best PGA Championship showing. The 2020 Masters runner-up has never finished better than tied 25th (in 2015, the year of Jason Day’s win). He looked to be in spectacular touch heading to Augusta this year off the back of his lucrative Players’ Championship win in March and was well in the hunt before disaster struck on the 12th in his final round. How he recovers from those mental demons will be central to his hopes. On some level, however, Smith must have taken heart from seeing American world No.1 Scottie Scheffler break his major duck after similarly banging on the door in recent years. C’mon Cam, it’s your turn.

Day’s record-breaking three-shot victory over Jordan Spieth seven years ago gave the Queenslander his sole major victory to date. Day is not in the greatest form, however, missing out on the Masters and failing to make the cut at The Players, Valspar Championship and Texas Open of late. He bounced back at the Wells Fargo to finish tied 15th earlier this month after a tied 10th at the Zurich Classic in New Orleans. Scott has also been there and done it but his 2013 Masters triumph is getting further and further back in the rearview mirror.

Scheffler shares top billing with Jon Rahm at $13, while Jordan Spieth, Rory McIlroy, Justin Thomas, Collin Morikawa and Dustin Johnson are all $20 or under. Smith is at $21, with Day the next best of the Aussies at $56. Those fancying yet another Woods miracle can get $67 for their troubles, with Sportsbet quoting Scott at the same price. 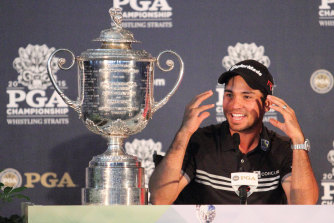 Jason Day with the Wanamaker Trophy in 2015.Credit:Getty

WHEN DO THEY TEE OFF?

The first group, featuring John Daly, Shaun Micheel and YE Yang gets under way at 11pm Thursday. Davis is the first Australian to begin his campaign, alongside Rikuya Hoshino and Matt Kuchar at 11.55pm. Smith, playing with Viktor Hovland and Will Zalatoris, follows at midnight. The dream trio of McIlroy, Spieth and Woods tees off at 12.11am Friday with Jones the last of the Australians in the early contingent at 12.28.