Melbourne Renegades have succumbed to a third batting capitulation this season after being bowled out by Perth Scorchers at Optus Stadium on Sunday.

The bottom-placed Renegades fell to 8-59 before some late hitting from the gritty bowler Jack Prestwidge (33 off 24 and 2/32) saw them finish on 89 to lose by 96 runs.

Melbourne has already been bowled out for 60 and 80 this season, but this performance, especially from their top order, could rank as their worst as they fell to their sixth loss from seven games. 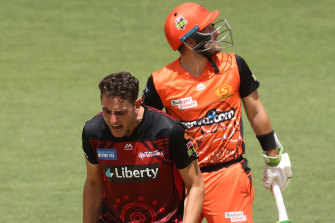 Prestwidge batted with purpose pulling a six to steer his side to the ‘Bash Boost’ point before the 10 over mark but they were already eight wickets down.

Some quality bowling from the Scorchers can be attributed to some of the wickets while Renegades captain Aaron Finch fell to the most unfortunate of dismissals after being run out at the non-striker's end.

Finch, who batted at No. 3, looked well-placed on eight runs from seven balls and was backing up when Shaun Marsh cracked a straight-drive down the wicket, Scorchers bowler Tim Behrendorff bent down and tipped it with his thumb before it crashed into the stumps.

Finch could also trudge off in dismay and his dismissal saw his side fall to 2-15 in their pursuit of Perth's 3-185, they never recovered.

The Renegades can chalk Finch's demise down to bad luck but they failed to make any luck for themselves either by converting difficult catches or knuckling down after those early wickets.

Melbourne can't blame anyone but themselves for Perth's daunting total as they couldn't convert two chances to dismiss the potent Josh Inglis, who made 72 not out from 47 balls, spear-heading a bumper second 10 overs, which saw them score 122 of their 185 runs.

Colin Munro's 52 runs was also vital for Perth alongside Inglis.

Spinner Peter Hatzoglou almost caught him in the 11th over but his back foot touched the boundary rope as he pulled in the catch while Inglis was also dropped later in the innings.

A contender for catch of the season from English import Jason Roy sent Marsh back to the stands for 14 as he dived full-length and caught a full-blooded Marsh cut-shot at point from the bowling of Aaron Hardie.

AJ Tye dismissed Rilee Rossouw the next over as Melbourne fell to 5-41. Mohammad Nabi was caught soon after at 6-46 with Perth eyeing off full points and an early finish.

Some people may attribute the speed in which they lost their last few wickets as being a result of chasing the Bash Boost point for reaching 64 runs by 10 overs but that excuse won't cut the mustard with many supporters.

The free-hitting Kane Richardson looked set to get his side to that bonus point making nine before Inglis showed quick hands with the gloves to run him out leaving his side at 7-59.

Prestwidge gave his side a point from their hapless day, the Renegades could do well to mimic his attitude when they run out for their next game.