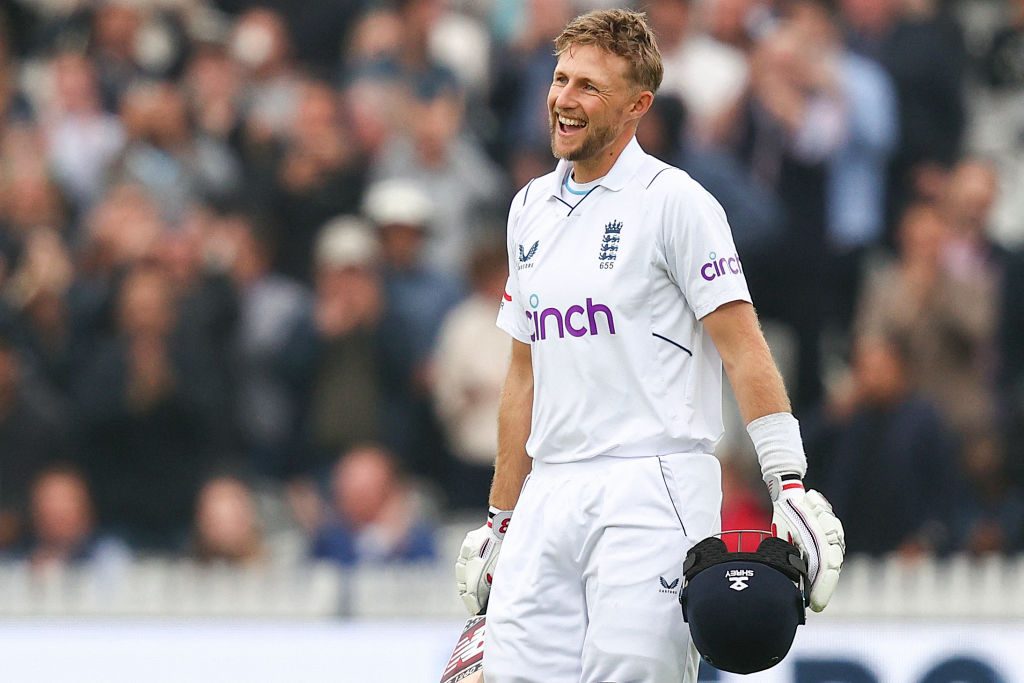 It took Joe Root until his second innings to realise he wasn’t still England captain. Then, finally, rid of the tension the job can inflict on its incumbents he played an innings which scored a three-in-a-row jackpot – a hundred at Lord’s; a win over world Test champions New Zealand; and the personal milestone of 10,000 Test runs.

The evidence of a burden lifted could be seen in the way Root played what has become his trademark shot, the back-foot guide between point and gully – a banker that had turned rogue after it began to bring his downfall, in the final Test against West Indies last March and again here in the first innings at Lord’s.

The margins in top-level sport are minute. When Root’s mind is calm and he executes the shot well he plays the ball very late with soft hands, the angle of the bat such that it ensures the ball’s path is downwards and controlled.

Any anxiety, and there was plenty when he was captain, and the bat tends to meet the ball earlier at an angle beyond the perpendicular, something that happened when New Zealand all-rounder Colin de Grandhomme dismissed him in the first innings.

When that occurs the stroke is less controlled and therefore riskier, though we are only talking fractions of a second. Yet, in precision sports, that can be the difference between success and failure.

Thankfully for England and their supporters, the Root we saw in that second innings at Lord’s was fully in control of his bat and his emotions, which has been his default setting from the off.

You don’t get to become the second England player to reach 10,000 Test runs (the other being Sir Alastair Cook) if you are a jittery sort who runs constantly on adrenalin – as some of his team-mates appear to do with bat in hand.

Root loves batting as he admitted in the post-match press conference on Sunday.
But it is the way he prepares by constantly challenging himself in practice, that sets him apart from so many of his contemporaries as a master of how to survive and thrive at the crease. Once, when England players were asked to design their own practice sessions, most worked on trying to hit the ball into the road.

But Root got one of the coaches to fire balls from a fielding machine into a catching ramp which he placed on a seamer’s length. The ball would move either way, unpredictably. What Root wanted to learn was a way of coping, whether through late adjustment of the bat or by not following the moving ball and letting it go past the edge instead.

Which may be why leaving the ball outside off-stump and playing late have become second nature to him but not to the majority playing county cricket.

Batting like Root seems at odds with the front-foot ethos, both figuratively and literally, being attributed to the Ben Stokes and Brendon McCullum partnership as England’s new captain and coach.

Certainly Stokes’ primitive knock at Lord’s, in which he made 54 after being bowled off a no-ball from De Grandhomme early on, suggested a turbo-charged approach.

Stokes’ innings undoubtedly gave impetus to England’s ambitions of chasing the 277 runs, but it seemed a bit hit and hope. More measured, and indeed more valuable given a breach would have seen England’s long tail called into action, was Ben Foakes’ unbeaten 32.

It was resolute and pragmatic but exactly what was required given the sage call was to keep Root company at the crease.

In those circumstances partnerships are what matter most and the 120 runs he and Root added together saw England to a much-needed win.

Afterwards, Stokes warned his England team were a work in progress, the inference being for us not to expect world domination yet just because they had beaten the world Test champions.

New Zealand certainly looked rusty and while they did well to keep themselves in the match after being 45 for seven on the opening day, they should prove a tougher proposition for the second Test which begins at Trent Bridge on Friday.
England should certainly feel emboldened after their victory as winning tends to do that. But they need to become more robust and find others who can do some of the heavy lifting with the bat.

Sort that out and the blank canvas of which Stokes spoke when describing the England team’s style under his captaincy might become more than a portrait of Joe Root.

Test debuts come in all hues on the Kipling spectrum of triumph and disaster but Matthew Potts enjoyed an excellent one after taking seven wickets against New Zealand at Lord’s.

A bustling, muscular, right-arm pace bowler for Durham, Potts is unusual in that he tends to angle the ball in to right-handers, something he shares with few other England bowlers of which Angus Fraser, Andrew Flintoff and late-career Stuart Broad are the most prominent in recent times.

Those three have all been successful but for many decades the orthodoxy used to be that unless a pace bowler was 90mph plus (Potts is 84-88mph) they would need to take the ball away from right-handers to enjoy a successful career – the theory being on docile pitches and with no time pressure to harry them top-order batters rarely get out to straight balls.

Two things have become more prevalent since that thesis was proposed – lbws and white-ball cricket. If a bowler takes the ball away from batters in the T20, or 50-over game, he allows them to free their arms into the shot, which often means boundaries.

That potential to leak runs has driven the fashion for attacking the stumps as it cramps the batsman for room as well as bringing lbw or bowled into play if he misses the ball.

Potts, 23, has evolved in that setting and brought his direct approach to bear with great success.

As Stokes said afterwards: ‘Whenever I brought him on he had an immediate impact,’ which is the very definition of a strike bowler.

The challenge now is to keep him fit, something that has eluded so many talented bowlers in recent times.