Six people are under investigation by police after India fast bowler Mohammed Siraj complained of alleged abuse from members of the crowd at the SCG on the fourth afternoon of the third Test.

Less than 24 hours after the Indians reported that Siraj and fellow seamer Jasprit Bumrah had been the targets of racial slurs from drunk spectators, play stopped before tea on Sunday after another allegation of abuse was made.

The game halted for more than 10 minutes after Siraj, fielding on the boundary in front of the Brewongle and Clive Churchill Stands, told India captain Akinkya Rahane and umpires Paul Reiffel and Paul Wilson about being on the receiving end of alleged abuse. 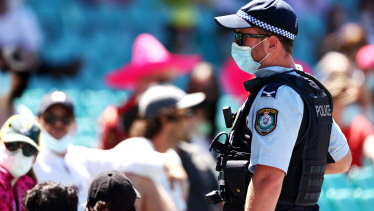 Police speak to spectators following a complaint from Mohammed Siraj of India that stopped play during day four of the Third Test match in the series between Australia and India at Sydney Cricket Ground on January 10, 2021 in Sydney, Australia. Credit:Getty Images

Reiffel and Wilson twice walked over to the perimeter of the ground to talk to security officials as police officers arrived at the lower tier the grandstand.

Australia captain Tim Paine, who was batting with all-rounder Cameron Green at the time, joined the Indians where they were assembled at the middle of the ground, with Siraj pointing towards the alleged culprits.

After speaking to several members of the crowd, police then escorted six spectators from their seats to the police room at the venue. Getty Images also photographed another spectator from the same row of seats leaving quickly up the stairwell once Siraj approached the umpires and before the police arrived. 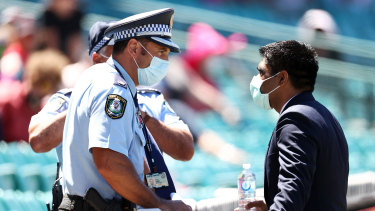 Police talk to a member of the Indian squad regarding a complaint by Mohammed Siraj of India during day four of the Third Test match in the series between Australia and India at Sydney Cricket Ground on January 10, 2021 in Sydney, Australia. Credit:Getty Images

The six men were interviewed by police and Cricket Australia's head of integrity and security, Sean Carroll, before being thrown out of the venue. CA said police were investigating their conduct.

The men were taken from the same area of the grandstand where Siraj and Bumrah reported alleged abuse had come from on Saturday.

Indian spectator Rishi Aryan, who was seated in the same bay, told The Sydney Morning Herald and The Age on Sunday: “All these boys were doing is a bit of sledging of the player on the outfield. First it was Bumrah then they had a sledge against Siraj. They kept calling him Shiraz and all that crap. Next thing you know they said: ‘Welcome to Sydney, Siraj’ and then he got the shits. That was literally it. Then he walked off.

“I don’t know why [the police kicked the men out]. Next thing you know you see police everywhere. It didn’t make sense. It was confusing.”

Another spectator with his family said there was nothing racist said. He also corroborated Mr Aryan’s statement that the phrase "Welcome to Sydney, Siraj" was used.

In a statement in relation to Saturday's incident, CA integrity and security boss Carroll said the organisation "condemns in the strongest terms possible all discriminatory behaviour. 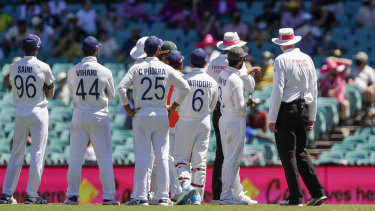 Paul Reiffel and Paul Wilson speak to the Indian players before tea.Credit:AP

“If you engage in racist abuse, you are not welcome in Australian cricket," Carroll said.

“CA is awaiting the outcome of the International Cricket Council’s investigation into the matter reported at the SCG on Saturday. Once those responsible are identified, CA will take the strongest measures possible under our Anti-Harassment Code, including lengthy bans, further sanctions and referral to NSW Police.

“As series hosts, we unreservedly apologise to our friends in the Indian cricket team and assure them we will prosecute the matter to its fullest extent.”

Venues NSW chief executive Kerrie Mather said CCTV footage was being reviewed in relation to the ICC probe into Saturday's events, which will now be widened into the alleged abuse of Siraj on Sunday.

“At the SCG, we pride ourselves on welcoming anyone and everyone in a safe and inclusive environment,” Mather said.

“We are taking this extremely seriously. If those involved are identified, they will be banned from the SCG and all Venues NSW properties under our Act.”