No Glenn Maxwell, no spitting spin, no treacherous variable bounce, no spectators atop the Galle fort, and no – at least on current evidence – three-day Test match.

Instead, the start of Australia’s attempt to seal a second consecutive series victory in South Asia was characterised by the kinds of interludes that have been much more customary over the past three years. 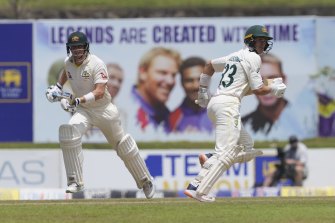 Marnus Labuschagne and Steve Smith get settled for Australia. Credit:AP

Principally, that meant the sights of Marnus Labuschagne (104) and Steve Smith (109 not out) each settling at the crease for a long stay. As settled that is, as the perpetually caffeinated Labuschagne and fervently finicky Smith can be. The stumps tally of 5-298 was built upon the first time the pair had made centuries in the same Test innings.

Labuschagne’s seventh Test century and first overseas followed a near miss in Pakistan earlier this year. Scored at brisk pace, it ended on the stroke of tea when the debutant left-arm spinner Prabath Jayasuriya found sharp spin to tease out a stumping – Labuschagne had been reprieved of a similar exit at 28.

At the other end, Smith fashioned bespoke answers to the questions being posed by Sri Lanka’s bowlers, carefully building into his work in an innings that was given added gravitas by the memory of his run out and reaction last week. He gave not the ghost of a chance.

In the day’s final half hour, he drove Sri Lanka’s sole pace bowler Kasun Rajitha through the covers for his own century. It was Smith’s second since the 2019 Ashes and first since January 2021. After Joe Root flew past him in that time Smith has, for now at least, levelled up. 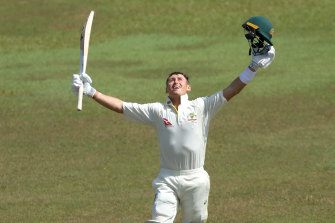 Together, Labuschagne and Smith had worked at ensuring the early loss of David Warner and the rare failure of Usman Khawaja to capitalise on a sound start would not be unduly hurtful to the touring side’s chances on a surface far more receptive to traditional Test batting.

That much was clear from the moment captain Pat Cummins, plus selectors George Bailey and Andrew McDonald, concluded that their flirtation with including Maxwell in the Test team for the first time since 2017 would actually have been better pursued on the pitch for the first Test.

After Cummins won the toss, Rajitha conjured the perfect delivery to undo Warner from around the wicket, angling in then straightening just enough to beat the edge and flick the stumps: Stuart Broad could scarcely have done better.

Khawaja, who swept and danced down the pitch so well in the first Test, here seemed to moderate his method for a less capricious surface. But in doing so he allowed Ramesh Mendis to work at finding a way past. 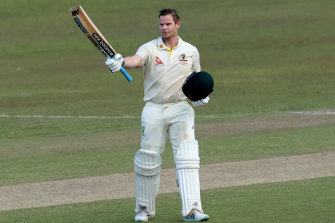 Steve Smith raises his bat after his century.Credit:Getty Images

Having made only 12 from his previous 35 balls, Khawaja went back to defend a ball of flat trajectory, only to lose his off bail when it turned just enough to beat the outside edge.

Labuschagne, though, had been getting increasingly busy. He was nailing the slap shot style sweep he has mastered on this trip, aiming to hit balls pitching outside off stump so to avert the risk of lbw, and manoeuvred the ball through the off side with skill.

Pivotally, in the over after Khawaja’s exit, Labuschagne advanced to Mendis and was beaten by an off-break that did not spin. Niroshan Dickwella, however, missed the chance. In commentary, Brad Haddin reckoned Dickwella had assumed Labuschagne would hit the ball, raised his eyes too soon, and lost track of the ball.

Of course, the survival of an early chance is another trope of Labuschagne’s success thus far in Test cricket. He is adept at making teams pay for missing him, and did so again, reaching three figures with a ping off his pads and celebrating accordingly.

When Labuschagne was lured down and stumped in the final over of the afternoon, Dickwella removed the bails with something like disgust. Not long after tea he was accused of doing so again when Head was bowled by Jayasuriya, though replays confirmed the ball had done it.

Cameron Green, match award winner last week, soon offered Dickwella another stumping chance to spurn. He was then somewhat unfortunate to be given out lbw by Kumar Dharmasena, having stooped forward to sweep and got his front pad almost entirely outside the line of off stump.

Smith forged on, at times torn between the urge to just keep batting, and the team’s need to maintain a scoring rate that kept pressure on the bowlers. Alex Carey, proactive as ever, aided the senior man to this end, and embraced him warmly when three figures arrived.