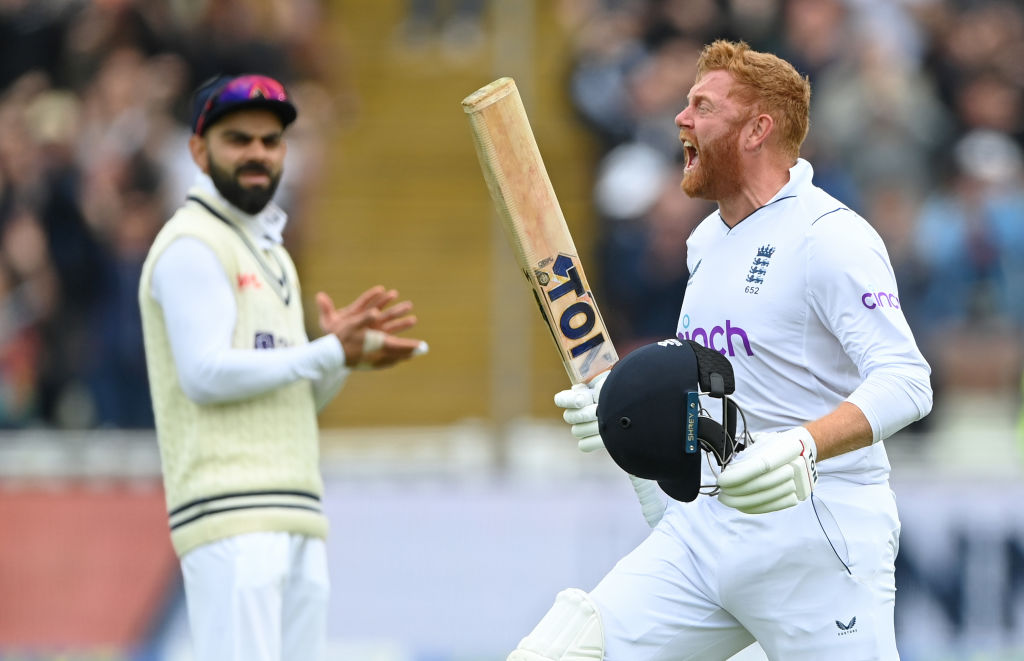 Jonny Bairstow played down his clash with Virat Kohli during England’s Test match with India on Sunday, saying it was ‘great craic’ at Edgbaston.

It was another great day for the Yorkshireman in an England shirt, making 106, but India are firmly in control heading into the fourth day on Monday.

The tourists are 125-3 in their second innings, leading by 257 runs and with Cheteshwar Pujara and Rishabh Pant in and looking good at close on Sunday.

India might be in control, but Kohli was flustered during Bairstow’s fine innings, having heated words with the Englishman before the umpire stepped in.

Bairstow gave his side of the story at the close of play, dismissing the dust up as simply two passionate, competitive players enjoying the heat of battle.

‘There was literally nothing to it,’ the 32-year-old told Sky Sports. ‘We’ve been fortunate to play against each other for over 10 years now, we’ve had some fierce battles on the field and we’re very lucky to be out there playing.

It’s tense out there between Virat Kohli and Jonny Bairstow ð³#ENGvIND pic.twitter.com/3lIZjERvDW

‘We’re two very competitive people, out on the field doing what we love. That’s why we play the game. We’ve got 11 guys on each side wanting to do well for their country.

‘It’s passion, it’s what you play for. There’s literally nothing in that. It was great craic out there.’

Kohli blew a kiss to Bairstow after his dismissal ð pic.twitter.com/Ig5WKyis7k

After scoring 1 and 16 in the first Test against New Zealand in June, Bairstow was under a bit of pressure but he has burst back into the most spectacular run of form.

He has now scored hundreds in three consecutive Tests after battering 136 at Trent Bridge against New Zealand and 162 at Headingley against the same opposition last month.