AFL legend Malcolm Blight can’t recall where he was when he first laid eyes on Adelaide’s Andrew McLeod – he was either watching at home or he was in commentary – but he can certainly remember precisely what he saw.

It was Saturday, May 25, 1995, a Round 9 game between the Crows and Hawthorn at Football Park.

As the seconds ticked away with Adelaide four points down, the ball came inside 50, McLeod – playing in his second AFL game – ran back off Hawks experienced defender Ray Jencke, swooped on the ball and sent through a dribble kick on a tight angle. A miraculous winning goal.

“Ooohh!” Blight says. “That was a bit special.”

Crows two-time premiership winning captain Mark Bickley was on the ground that night and recalls: “Jencke gave him a three or four metre start, and he used his pace to get around him and then a little bit of artistry in picking up the ball and kicking the goal.

“It just showed that from really early on, he had this sense of occasion, and he’d get things done when it mattered most.” 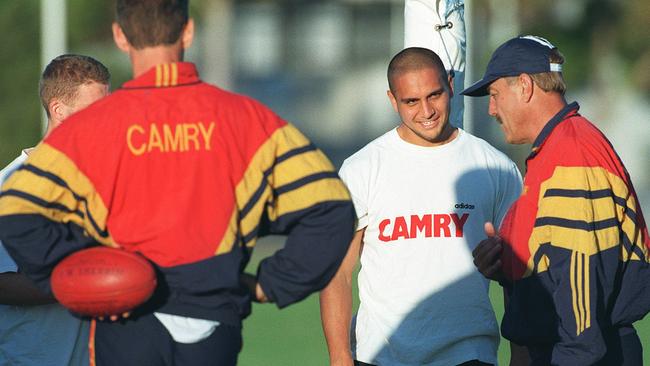 When Blight joined Adelaide as its head coach ahead of the 1997 season, McLeod was only 34 matches into what would become a club-record 340-game career, one in which he’d be hailed the greatest Indigenous Crows player ever.

Blight recalls meeting McLeod for the first time and noticing a bit of puppy fat around him, but as soon as the superior work ethic of players like Bickley, Mark Ricciuto, Ben Hart and Nigel Smart rubbed off on the younger McLeod, he flourished (legend has it that McLeod lost 10kg that pre-season).

But a chat with Port Adelaide’s SANFL coach Stephen Williams changed all that.

“I said to Stephen: ‘What about Andrew?’. He said, ‘Well, we got him as a half-back flanker from Darwin’.

“And that was almost the light bulb moment for me.

“I don’t thank Stephen often enough, really, because he was right.

“McLeod slotted in there beautifully. Some of the games he played there in ’97, he was almost faultless, he could beat his man, and then set us up, so much so, he won the club best and fairest in his first full year.” 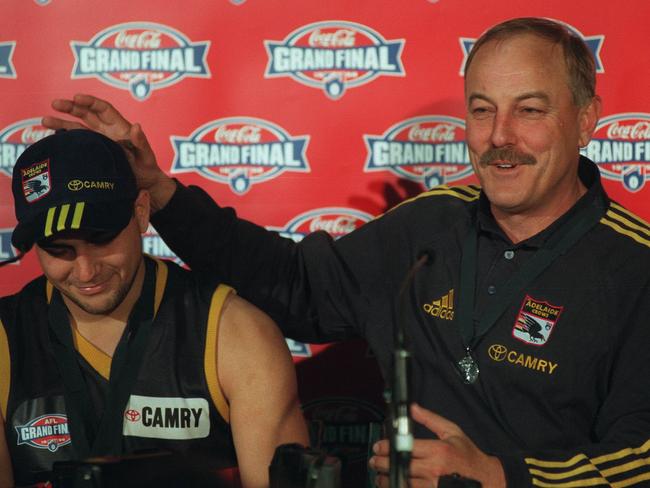 Blight has one enduring memory from 1997, aside from the premiership glory that came with beating St Kilda by 31 points at the MCG.

It was Round 19’s Showdown II against a burgeoning Port Adelaide. Pride was on the line after the Power had beaten the favoured Adelaide in Showdown I. It was a wet, miserable night at Footy Park, and again the Crows were down as the minutes ticked away.

Then Troy Bond kicked a goal, which put Adelaide a point in front, before McLeod sealed the game with a late goal before the siren.

“Of all the things that happened that year, I’m forever grateful for Andrew kicking that goal to put us up seven points,” Blight says.

“It was a horrible night in Adelaide and he sliced this goal from a 30-degree angle from the left forward pocket.

Brisbane came very hard for him

With his silky skills and glide-like run, it was no surprise that clubs came looking for McLeod’s services.

The first club to come after him, was, of course, Adelaide, who swooped on the Darwin-born teenager in 1994 after he’d just won an SANFL premiership with the Magpies. They were able to do this when Fremantle traded their right to recruit McLeod and in return Adelaide sent Chris Groom west.

Crows’ then general manager Bill Sanders was crucial to securing him in the tricolours.

“Our recruiter Tim Johnson came to me and mentioned this young fellow playing for Port Magpies who Fremantle had claimed under their concessions. Tim had been given a bit of a head’s up that things weren’t going well in their negotiations … so we made contact with McLeod’s father, Jock, in Darwin to flag our club’s very strong interest.”

With a deadline of the following day in which to lodge the paperwork, all negotiations were held frantically over the phone. Then came a late complication: the Crows had to fend off an enormous offer from Collingwood, which had been placed on the table, and included an inducement to Jock if he could get Andrew to sign with the Pies.

“But they stayed firm and true to the Adelaide Footy Club,” Sanders says.

Another attempt to lure McLeod from West Lakes came at the end of the ’97 season, with McLeod then a 21-year-old and both a premiership medallion and a Norm Smith hanging around his neck.

This time it was the Brisbane Lions who came knocking.

“I went round and saw him. I just said to him … if you stay here, I’ll help you become a midfielder and it will be done with time and eventually, hopefully, you can become a one-club player.”

The rest is history. 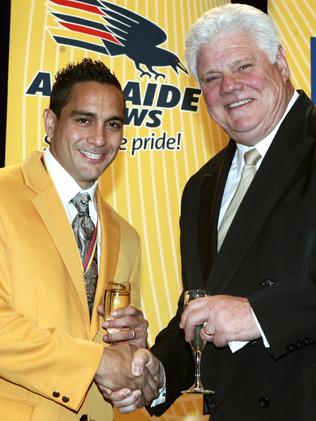 And besides the back-to-back flags and Norm Smith honours, over a 16-season career McLeod went on to become a three-time club champion and five-time All-Australian.

That moment was really special

In 2005 Sanders sat alongside McLeod at a glittering celebration at Melbourne’s Crown Casino for the naming of the Indigenous Team of the Century.

“When they read the Indigenous team out, they read it from the back lines to the forwards and there was no McLeod. I thought to myself: ‘Oh, god, what’s happened here?’

“And then they read out the first ruck: “(Graham ‘Polly’) Farmer, (Barry) Cable, McLeod’.

“Now, with the history of Polly Farmer and Barry Cable, to put Andrew McLeod in at first ruck, that was just one of the most magical moments you could ever wish to experience and to see the joy on Andrew’s face.

“You could see the pride and what it meant to him, to be in that company. That moment was really special, in a lot of special moments that he’s had.”

Sanders also recalls the club’s hope that McLeod would win the Brownlow Medal after his “very, very good” 2001 season. “He got 21 votes and Akermanis got 23. In the last game of the season, McLeod didn’t get a vote, but it was the view and opinion of many, that he was best on ground (McLeod had 37 disposals and seven clearances in a 37-point loss to Fremantle).

“With a good chance of him winning the Brownlow, we took Jock, his father, over to the Brownlow count without Andrew’s knowledge with the thought that if he did win it, it would be a lovely surprise.

“It was credit to Andrew that whilst the club was disappointed, there was never any acrimony or bad feelings on his part, he is very sincere in his humility.”

He played the game in the right manner

If there’s one word everyone uses to describe McLeod, it’s “humble”. But also quiet. Reserved. Intensely loyal. A friend for life.

“Nobody got on better with the cheer squad,” Bickley observes.

“It was not unusual for Andrew to go down and show his face in there while they were making the banner.”

Bickley jokes this could have been the reason McLeod was always last to run onto the ground and would never run through – but instead around – the banner that had taken the cheer squad so long to construct.

But Bickley loves the cheeky side to the champion.

“I had the misfortune of doing some one-on-one with him at training and he was meant to be the defender and I was meant to be the forward and I led out and the person who kicked it, kicked it about a metre or two over my head, and so as I propped to go back and try and mark the ball, all of a sudden I felt Andrew standing on my shoulders and he took what people would describe as ‘Mark of the Year’ over me at training.” Andrew McLeod has designed many of the Indigenous jumpers worn by the Crows. Picture: Sarah ReedSource:News Corp Australia

Bickley recounts a trip he took with McLeod in the late ‘90s to Darwin and further up north to the Elcho Islands and one of the most endearing memories.

“He was showing me around and we went for a swim in a watering hole and he assured me it was safe. But then he said: ‘Oh, by the way, if you hear me say the word ‘baru’ I’d be getting out’.

“I’m not overly brave, or overly stupid, so the minute he said that, I was out.

“But he’s got a really cheeky smile and when he was playing footy that would often come out. I have memories of him tying the opposition in knots and then turning around with a cheeky smile.

“It was the same cheeky smile he flashed when he took the ‘Mark of the Year’ on me at training.” Of McLeod’s football Blight says: “Quick, courageous, skilful on both sides of his body, fantastic in the air … he could do anything on the football ground”.

Bickley: “He played the game in the right manner. There was no one fairer than him in the way he played.”

Sanders: “He seemed to make it appear quite an easy game to play.”

Sanders says it’s wonderful that McLeod is coming back to the club again after his rift with the AFC hierarchy went public last year, when he commented the headquarters were “sterile” and that he was no longer felt as welcome.

McLeod was a guest at an official club function at the recent Adelaide/Melbourne game where the Crows thrillingly came away as one-point winners at Adelaide Oval.

McLeod’s presence at that event was met with great joy by those who attended, and according to insiders, was surrounded by people wanting his autograph and to have photos taken with him.

“The personal record that McLeod established puts him way up in the higher echelon of AFL players,” Sanders ponders. “And to have a player like him, in your club, to have achieved what he has personally achieved brings a lot of distinction.

“Players like Andrew, they come along only every now and then.”