Josh Hazlewood believes he is capable of putting in another dominant Ashes performance with minimal Sheffield Shield preparation, but admits he is still sorting through the changes in mindset and approach he will need if he is to figure successfully in Australia’s tilt at the Twenty20 World Cup in the UAE before the home Tests.

Alongside a rhythmic Mitchell Starc, Hazlewood destroyed the West Indies top order in the opening one-day international in Barbados on Tuesday night, but the 50-over format is not the one where major prizes are up for grabs in coming months: Test cricket and Twenty20 are.

In 2019, Hazlewood was returning from a back injury, and selectors preferred to hold him back from the ODI World Cup and even the first Ashes Test at Edgbaston before he roared to life with 20 wickets at 21.85.

While he now considers that a distant memory “pretty much forgotten”, Hazlewood recalled how he and Pat Cummins obliterated India in the first Test in Adelaide last summer as evidence they won’t need much in the way of Sheffield Shield preparation for the Ashes.

“I think we showed last year that not playing a red-ball game doesn’t really have an impact,” Hazlewood said from Barbados. “Patty and I did quite well, especially in that first Test [in Adelaide] but throughout the summer and that was on the back of no red-ball cricket.

“So I think whenever you’re playing international cricket, my role in ODI cricket is not too dissimilar to that in Test cricket – it’s about hitting that line and length and challenging the top of off stump. So whenever I’m bowling in international cricket, I feel like I’m in a good position to play whichever format is coming up.” 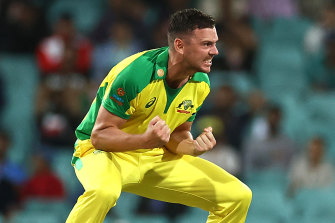 Josh Hazlewood is not worrying about being underdone in the Test format.Credit:Getty Images

Nevertheless, Hazlewood and his teammates were given a short, sharp lesson in the Twenty20 mindset when pounded 4-1 by the West Indies in St Lucia. The Australians still haven’t found a way to handle the wrist spin of Hayden Walsh jnr, and the hosts quickly gathered themselves after Hazlewood claimed an exceptional 3-12 in the opening game to take a far heavier toll on him (1-104 from 11 overs) over the remainder of the series.

“I haven’t played a lot of T20 cricket for Australia and it’s just good to get a run of games together and work on a few things against one of the best teams in the world in West Indies. It was also good to watch the way they went about it,” Hazlewood said. “They’re obviously specialists in that format and just to watch their quicks and their players go about their business, you can learn a lot there as well.”

In the absence of Cummins and also Kane Richardson, who is among the best powerplay and yorker bowlers in the Australian system, Hazlewood said he was trying to adapt from the consistent “top of off stump” approach that serves him so well in Tests and ODIs to the “every ball is an event” thinking of T20.

“Certainly it was a good learning curve to play four games in the space of a week against high quality opposition,” he said.

“I think it’s been about being proactive and getting ahead of the batsman and having a sense of when they’re going to come after me and hit me off that length and get a step ahead when I can.

“I think it’s a bit of everything. You’ve got to treat every ball as an event and you can change your field every ball to bowl a specific delivery and I think West Indies did that better than us throughout the series. They’re specialist players in that format and they were good to watch.”

Hazlewood said the tourists were mentally prepared for the Bangladesh leg of the tour that is set to follow this one, in which they will be confined to a far tighter bubble than the one in the West Indies, where rounds of golf and visits to the beach have been possible in between matches.

“We’ve had a few meetings about what it’s going to look like in Bangladesh and it’s obviously going to be quite tight restrictions and within the bubble,” he said.

“I think it’s purely going to be either at the hotel or at the cricket ground, which we’ve done before and we’re used to. It’s quite a short trip as well, which is good, so I think it’ll be no dramas, we’ll get that done on the back end of this tour.”