Adelaide: Ben Stokes found himself surrounded by a mighty Indian media contingent at Adelaide Oval on Tuesday afternoon, in a small-scale preview of the scenes to be witnessed over two packed Twenty20 World Cup semi-finals this week.

The SCG semi-final between Pakistan and New Zealand on Wednesday is already sold out for a capacity crowd of around 42,500 and only a few thousand tickets remain for India’s Adelaide showdown with England on Thursday, meaning another crowd exceeding 40,000 is likely. 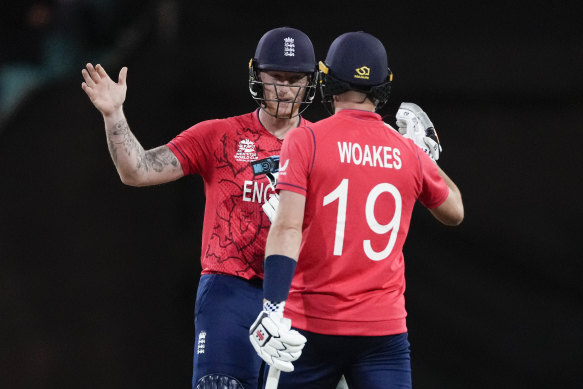 That sort of assembly will be a fine stage on which Stokes, Virat Kohli and other luminaries such as India’s T20 maestro Suryakumar Yadav – widely known as SKY – can live up to the kinds of truisms that England’s Test captain delivered to the Indian media.

“This is the crunch time in the tournament, Thursday’s all about which team turns up and can perform at their best,” Stokes intoned.

Asked inevitably about Kohli, Stokes borrowed some words from the book of Lord Ian Botham about never writing off a champion.

“Virat could have four unbelievable years like he had and then have a not so loud couple of months,” he said, “and then for some reason players like that will get written off, I’ve got no idea why. I think he’s earned the right to never be written off.

“You don’t produce the numbers and the innings he does over all three formats … as players and people who play against him a lot, you never take anything he’s done in the game before into the game he’s got here.”

As for his own role in a tournament where sportier pitches have allowed for the skills of all-format players to come through in select battles with more T20-oriented stars, Stokes said that adaptation was critical, as he demonstrated in a tricky chase against Sri Lanka.

“I just knew what I had to do,” Stokes said. “I assessed pretty early that I was going to try my hardest to be there at the end. The situation itself wasn’t too much of an ask, it was basically just a run a ball from the whole time I went in, but the wicket was slowing up and getting a bit worse as we spent more time on it, so I just assessed that I’ll stay in there and be there at the end.

“It’s about assessing and adapting to whatever situation that’s in front of you. We come here to Adelaide, which is a very different dimension ground to the other grounds we’ve played on.

“We’ve been playing on big square boundaries and looking to try to get the batters to hit to them, whereas obviously, here we’re probably going to look to change our tactics around that.”

England and India each have an injury concern. Dawid Malan was unable to be part of the chase against Sri Lanka at the SCG due to a groin injury and may be replaced by Phil Salt. India’s captain Rohit Sharma was struck on the glove during his Tuesday net session and required treatment.