Australia great Ricky Ponting has questioned Pat Cummins’ place in the side in a game the hosts are likely to have to win by a big margin to keep alive their Twenty20 World Cup defence.

As part of a one-off strategy for the unusual circumstances the reigning champions find themselves in, Ponting said there was merit in leaving out the pace ace to squeeze in all-rounder Cameron Green, who would provide Australia with more firepower with the bat.

The fitness of skipper Aaron Finch, who is battling a hamstring injury, is Australia’s key selection issue. If he is ruled out, Green would most likely come into the XI at the top of the order. But should the captain be selected, Green may have to come into the side at the expense of one of the three fast bowlers.

For Ponting, he would be retaining Josh Hazlewood, whom he rates as the team’s best T20 fast bowler, and Mitchell Starc, leaving Test and one-day international captain Cummins as the man to make way.

Another scenario Ponting would consider is using Green in the middle order, which would spell trouble for Tim David, who is also under an injury cloud.

“If Finch is fit, that’s where the big decision has to be made,” Ponting said. “At Adelaide Oval, do you leave a spinner out and play another all-rounder? Do you leave one of the frontline quicks out and use Green’s bowling to strengthen your batting? 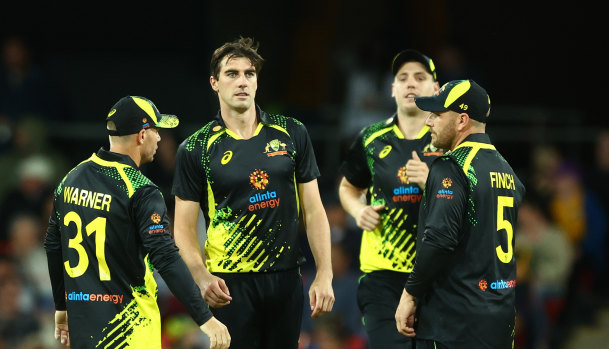 Ricky Ponting says Pat Cummins’ place in the T20 side may be under threat.Credit:Getty Images

“Green’s bowling is comparable to most of those guys anyway and they might have the luxury of playing the extra batsman and maybe let Green go to the top and absolutely tee off, or they use him as a floater in the middle order somewhere.

Australia will advance to the final four if either of New Zealand (against Ireland) or England (against Sri Lanka) lose. The most likely scenario would require Australia having to win by enough to take their run rate, currently at -0.304, above England’s (0.547). England have the advantage of playing last and knowing what is required.

“Whichever way they go they’re going to have to take a real risk and [throw] caution to the wind and try and win that game as quickly and as comfortably as they can,” Ponting said. “If they lose trying to win it well then that’s the way it is.”

Watch Australia in the ICC Men’s T20 World Cup live and free on Channel 9 and 9Now.