Kiwi Martin Guptill has monstered a six out of the park, setting a blazing record in the Second T20 against Australia in Dunedin. 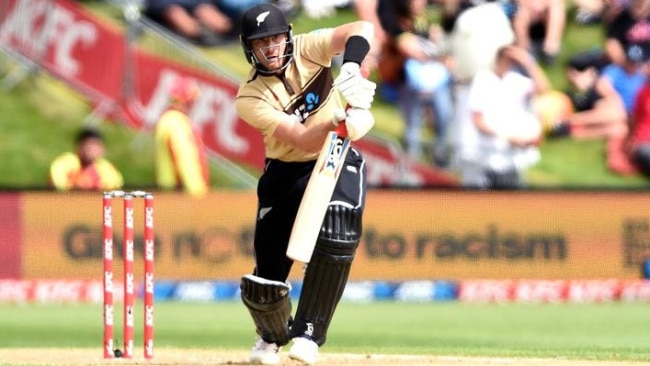 Welcome to our live coverage of Australia’s second T20 match against New Zealand.

The Kiwis thumped the Aussies by 53 runs in the series opener on Monday and will be looking to drive the advantage home in Dunedin.

Visiting captain Aaron Finch and Co. will be desperate to find some form and even the ledger in the best-of-five series.

Finch won the toss and sent the Kiwis in to bat before announcing Australia goes into the Second T20 with an unchanged line-up.

Watch every ball of the 2021 QANTAS T20 Tour of New Zealand Live & Ad-Break Free During Play with Fox Sports on Kayo. New to Kayo? Get your free trial now & start streaming instantly >

Aaron Finch has announced Australia will take an unchanged line-up into the Second T20 in Dunedin after being destroyed by 53 runs earlier this week in New Zealand.

Finch also sent the Kiwis in to bat, having won the toss.

His decision to put the Kiwis in raised the eyebrows of Aussie great Mark Waugh, who suggested Finch has lost faith in his bowling unit after coughing up 33 runs in the final two overs in the series opener.

"That could have something to do with it as well. He thinks their batting is there strong point."

Martin Guptill has scored the equal quickest fifty by a New Zealander after twice crunching Adam Zampa out of the park.

The opener reached his 50 from 27 balls.

The highlight was two sixes in the one Zampa over, with one sailing miles clear of the University of Otago ground in Dunedin.

"That’s near the tractor shed," Mark Waugh said of the six on Fox Cricket.

Kane Richardson has the first crucial breakthrough for Australia, removing Tim Seifert in the fourth over.

Richardson cramped Seifert with a shortish ball that popped up to cover after hitting high on the blade.

It left New Zealand 1/25 after the first four overs.

Aaron Finch will be desperate for runs today as he suffers through a form slump that has brought increased scrutiny on his place in the team.

The captain was out for one on Monday after slapping Tim Southee straight to point, continuing a run of low scores that hit rock bottom in a disastrous Big Bash campaign for the Melbourne Renegades.

There’s no denying Finch is one of Australia’s most successful cricketers in the 20-over format — earlier this summer, he was named in the ICC Men’s T20I team of the decade and he’s twice been awarded Australia’s T20 player of the year – but lately he has been badly out of touch.

The Aussie skipper was dropped by Royal Challengers Bangalore during last year’s Indian Premier League, scoring just one half century in 12 matches, and was snubbed completely in this year’s auction, meaning he’ll miss out on the lucrative T20 tournament in 2021.

Finch then registered just 179 runs in 13 innings for the Renegades on home soil and unless he plunders some runs against the Black Caps soon, will remain in his own personal cricket nightmare.