Australia thrashed by Bangladesh in match not broadcast on TV

Australia lost their sixth Twenty20 international in seven games on Tuesday night, this time spun out by Bangladesh in Dhaka.

They restricted the hosts to a mediocre tally of 7-131, only to be quite a bit less than mediocre themselves and fall 23 runs short as Mitchell Marsh provided the only innings of substance. Australia had never previously failed to chase a T20I target this paltry, nor been beaten by Bangladesh in four previous meetings. 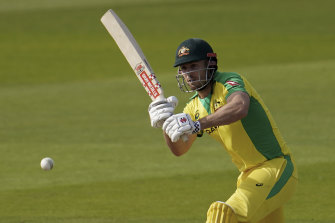 Mitchell Marsh provided the only innings of substance for Australia.Credit:AP

But to say much more would be to admit that the match had been watched illegally, in the face of the scarcely believable scenario whereby a series involving the national men’s cricket team was unavailable to Australian TV viewers for the first time in nearly 30 years.

For a measure of the absurdity, look no further than the plight of the permanent T20I captain, Aaron Finch. From hotel quarantine back home in Melbourne after his early exit from the tour due to a knee injury, Finch was left to tweet helplessly in search of how to bypass a total blackout of the match on these shores in order to watch his teammates.

Finch’s question was eventually answered with one of numerous illicit streaming links that float around the online world at any time a cricket match is played. But the fact that these were the lengths Australian cricket followers had to go to, simply in order to watch the national team, was a worrying watershed for the game.

Not since a tour of Pakistan in 1994 has the senior Australian men’s team played a series that was not broadcast back home via either a free-to-air or Pay TV carrier. For most of the intervening years, Foxtel has been that broadcaster, as cricket access provided one of the backbones to its subscriber base.

But since Foxtel signed up for the majority share of a six-year, $1.18 billion broadcast contract to air all matches in Australia in 2018, it has entered into an increasingly fevered game of tour-by-tour brinkmanship with overseas boards and their agents over the fees for lower profile tours.

As far back as May, when dates for the series were first announced, the agents representing the Bangladesh Cricket Board for overseas rights were rebuffed in their first attempts to discuss a deal for the series with Foxtel.

In itself, this was not unusual. The West Indies series that comprised the first leg of Australia’s tour went much the same way, until terms were reached a couple of days before the first match was due to start.

But as the Bangladesh series crept closer, there was no hint of a resolution between Foxtel and the BCB’s representatives. As the match got under way at 10pm AEST on Tuesday, the parties were completely at odds over how the impasse had evolved.

Foxtel argued that the asking price for the series was too high, especially given the numerous high-profile Australian names missing from the series; the BCB’s rights agents rebutted, just as firmly, that no figures were even discussed. Other broadcasters, perhaps surprised at Foxtel’s hesitance, did not show any significant interest when approached.

Furthermore, the threat of a complete blackout, with no free stream of the series available on YouTube despite earlier indications to the contrary from Cricket Australia, turned out to be accurate.

Either way, the outcome was one that any cricket followers under the age of 27 have not experienced in their lifetimes, and that no-one more seasoned could ever have expected in an era of digital, streaming and so many more broadcasting options than existed back in 1994.

One can only wonder at the implications for the Australian team’s tour sponsor Qantas, which not only provided the charter plane on which the squad have trekked from Saint Lucia to Barbados to Dhaka, but also emblazons the green and gold shirts of the players. The value of that advertising space is at least partly predicated by the expectation that the team’s exploits will be seen in Australia: not this time.

As for the match itself, Josh Hazlewood (3-24), AJ Tye (1-22) and Ashton Agar (0-22) all delivered suffocating spells after Wade chose to bowl first. But the chase was off-balance from the first ball of the innings, which slid through Alex Carey, and aside from Marsh there was precious little to be proud about.

The Australians are in a serious T20I rut only a few months out from the World Cup in the UAE. Since the coming of COVID-19, they have won just five of 16 completed matches, losing series to England, India, New Zealand and West Indies before beginning this one.

Whatever their travails, the lack of a legal broadcast feed for the national team back home means that Australian cricket matters a little bit less today than it has for each of the past 27 years. The old marketing line that “you can’t be what you can’t see” seems uncomfortably apt.

Sports news, results and expert commentary. Sign up to our Sport newsletter.