Jonas Vingegaard sealed his maiden Tour de France victory on Sunday, riding into Paris to cap a dominant display from his Jumbo-Visma team.

Belgian Jasper Philipsen (Alpecin–Deceuninck) won the final sprint stage on the Champs-Elysees as Australian star Caleb Ewan (Lotto-Soudal) once again missed out on a stage win, finishing eighth after never being in the right position. 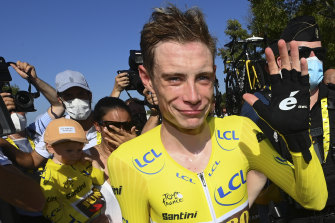 The 25-year-old Vingegaard became the first Danish rider to win cycling’s biggest race since Bjarne Riis in 1996. He finished 3 minutes, 34 seconds ahead of second-place Pogacar.

Vingegaard claimed both the yellow jersey and the polka dot jersey for mountains points, while his teammate Wout van Aert – arguably the star of the Tour, having lit up multiple stages – won the green points jersey.

It was a mixed Tour for Australian riders, Michael Matthews the stand-out for his stunning stage 14 solo ride for BikeExchange-Jayco.

Ewan arrived with expectations of multiple stage victories, but left as the lanterne rouge – the man with the slowest overall race time.

Ewan had the most wretched of Tours, two crashes, injuries, bad luck and missed opportunities littering his ill-fated three weeks.

Yet, perversely, the 28-year-old Sydneysider’s battle to even get to Paris is worth saluting. After all, 38 riders didn’t even make it to the 21st and final stage after this most brutal of Tours. 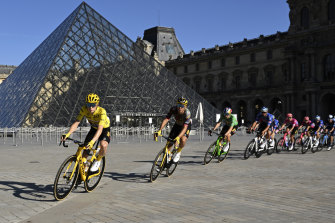 Yet despite all his misfortunes and his fears that he’d never make the time limit on the brutal final-week mountain stages, Ewan soldiered on.

Arriving at the Champs-Elysées on Sunday, took the Sydneysider almost six hours longer than yellow jersey Vingegaard, having endured more than 80 hours in the saddle.

Ewan – who has 11 grand tour stages to his name – may become the most distinguished of all lanterne rouge winners and would only be the second Australian to achieve the feat – 91 years after Melbourne rider Richard Lamb finished last out of 35 finishers.