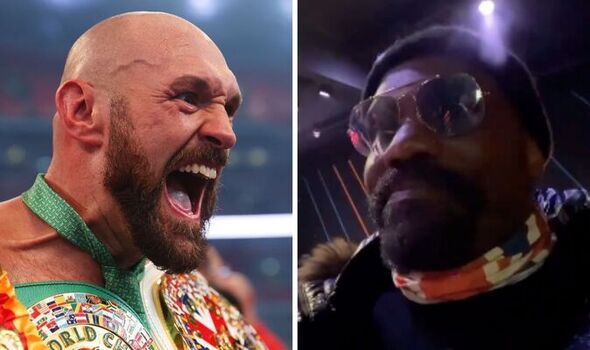 Tyson Fury has mocked his old pal Derek Chisora for ‘losing his house’ after the Gypsy King stopped Dillian Whyte inside six rounds at Wembley Stadium. The British veteran, who has shared the ring with both competitors on two separate occasions, was confident that the Body Snatcher was going to pull off an upset for the ages.

So much so, he told Jim White and Simon Jordan live on talkSPORT earlier this week: “I’m willing to put my house on it.

“I’m willing to put my house on Dillian Whyte knocking Tyson Fury out.

“Look at your faces in the studio! Tyson is my mate and I know he’s listening – Tyson, you’re going to get knocked out.”

Chisora then doubled down on fight night backstage with his recent opponent Joseph Parker, who bet his own house that stablemate Fury would stop Whyte.

And the Gypsy King did not forget Chisora’s prediction, making reference to it within minutes of his post-fight press conference…

“He lost his house to Joseph Parker, so unlucky.

“And Derek – I have got a house next to my house in Morecambe, you are welcome anytime my brother.

“But the moral to the story is never bet your house on something unless you’re one million percent sure.

“You can never be sure in the heavyweight division. Now he’s homeless, good luck to him.”

Fury also detailed his plans to walk away from the sport and into the sunlight.

He is adamant that the sixth-round TKO victory over Whyte was his last hurrah, stating he has no interest in what happens in Oleksandr Usyk and Anthony Joshua’s rematch.