Oscar Valdez will return after his knockout for the ages to fight Robson Conceicao in a WBC super-featherweight title defence on September 10 in Tucson, Arizona.

Valdez spectacularly knocked out Miguel Berchelt to capture the belt in his previous outing and now makes his homecoming to the city he called home after moving from Mexico.

“Valdez is coming off a career-best performance and wants to put on a spectacular showing in front of the great Tucson fans,” said Top Rank chairman Bob Arum.

“Conceição has been waiting for this shot ever since he turned pro, and having promoted him for his entire career, I know he’ll be at his very best.

“We have a great co-feature, as the young Gabriel Flores wants to prove he is a contender to watch, and he can do that by beating a tough Mexican in Luis Alberto Lopez.” 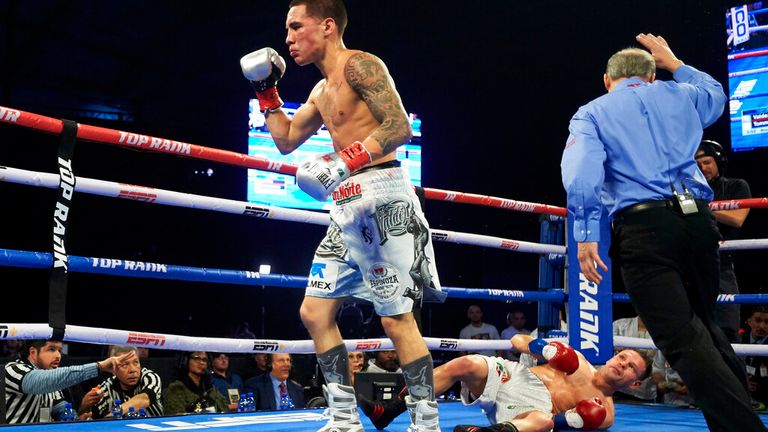 Valdez cemented his status as one of the faces of Mexican boxing with his 10th-round knockout over longtime champion Berchelt. He is 8-0 in world title fights, including six defences of the WBO featherweight world title he won in July 2016.

Valdez and Conceição fought as amateurs in the gold medal match of the 2009 Pan American Games, with Conceição prevailing by a single point.

“I am very excited to fight in my second home, Tucson, Arizona, where I will have my first defence of the WBC super featherweight world title,” Valdez said.

“It motivates me to know that I will defend the title in front of my friends and my family, and I will be willing to put it on the line as in all my fights. I’m coming to give a great show to my people, and I can’t wait to see you on September 10.”

Conceição said: “I’ve been waiting my whole life for this opportunity, and that’s why I’m training with great determination. I will represent my family and Brazil. I already won a gold medal for my country and now I will bring home a world title. With great determination, I will deliver a great performance. It will be a true spectacle!”