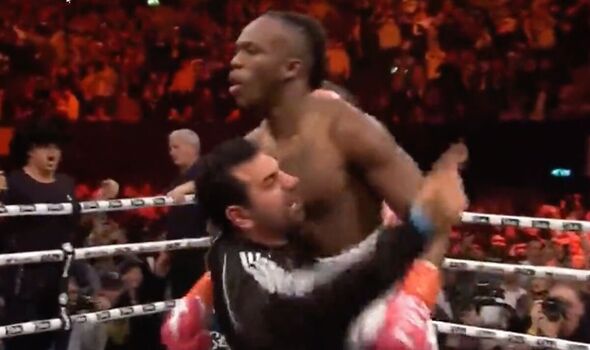 KSI returns to the boxing ring tonight against FaZe Temperrr at Wembley’s OVO Arena in London. The YouTuber-turned-boxer was first scheduled to fight MMA’s Dillon Danis but his original opponent pulled out with 10 days to go. Temperrr, the head of the famous Faze Clan, has stepped up to save the fight.

The Misfits Boxing 4 undercard – which includes Slim Albaher vs Tom Zanetti, Salt Papi vs Josh Brueckner and Elle Brooke vs Faith Ordway – gets underway at 7pm with the main event expected at nearer to 10.30pm.

This is KSI’s third ever exhibition fight and he puts his Misfits cruiserweight championship on the line. He was last in action back in August when he defeated two opponents – Swarmz and Luis Alcaraz Pineda – in the same night both via knockout.

FaZe Temperrr is 1-1 and defeated Overtflow via first-round KO in his most recent fight back in November. KSI is hoping for a win that helps set him up for a gigantic fight against nemesis Jake Paul later in the year.

Express Sport provides live updates of the evening below.

Hello and welcome to Express Sport’s live coverage of tonight’s Misfits boxing action, with the undercard set to begin at around 7pm.

KSI is headlining the event at the OVO Arena in Wembley and will go up against FaZe Temperrr after former UFC star Dillon Danis, who was originally in line to face the Brit, pulled out of the fight earlier this month.

There will also be appearances from several other big names in the world of social media, with the likes of Slim Albaher, Ryan Taylor, Salt Papi, Elle Brooke and Swarmz in line to feature before the main event later this evening.

We’ll be on hand to keep you updated with the latest results as they come in, so stay tuned!