In her former life as a make-up artist, Tina Rahimi spent her days enhancing people’s features. Now’s she’s busy rearranging them and creating history in the process as the first female Muslim boxer to fight for Australia.

Rahimi, who fights in a hijab and full-length body coverings, unleashed a brilliant Commonwealth Games debut in Birmingham on Thursday night to earn herself a bronze medal, at the very least, after dominating England’s Sameenah Toussaint on the way to a unanimous decision in the women’s featherweight quarter-finals. 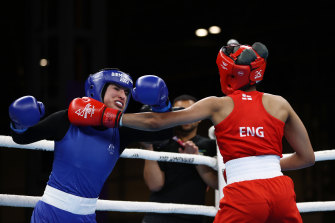 Tina Rahimi (left) is assured of at least a bronze medal after a Games debut to remember.Credit:Getty

The Australian had a bye in the first round and walked out into a hostile arena ready to roar home their fighter. But from the opening bell, Rahimi climbed all over the taller Toussaint, negating her reach advantage and landing the far harder shots.

It was a trend that continued for three rounds, with a frantic and busy Rahimi taking the crowd out of the equation and earning herself a semi-final against Nigerian Elizabeth Oshoba on Saturday.

“I felt like I was just going in there, swinging my arms, and not thinking about what punches I was throwing. I wanted to be aggressive, show I’m dominant, I didn’t want to leave anything to the judges. If I could have, I would have gone in and knocked her out. I wanted a stoppage,” Rahimi said.

“I was so nervous. Do you know how many trips I made to the bathroom? I knew she would have the home crowd, I knew everyone would be cheering for her. Once I walked out, all the nerves left and I felt really relaxed.

‘I’m showing that you can do anything in the hijab, it’s important to get out and be active.’

“I’ve just worked so hard for this. I’ve had some ups and downs and it’s so nice to know I will be going home with a medal. But I want to go home with a gold. I just can’t wait to get in there again.”

It felt like the longest wait to get in the ring for Rahimi, who wants to forge a path for Muslim women to compete in sport and physical activity in the hijab. If she continues to box like she did on Thursday, inspiring others to follow in her footsteps won’t be a problem.

“I know now I’m a role model and an inspiration to the Muslim females out there. I’m showing that you can do anything in the hijab, it’s important to get out and be active. They might feel like they don’t want to play sports because people might look at them funny,” Rahimi said.

“I want them to be comfortable going out there. Now they are seeing my on a public stage, doing what I love and showing that anything is possible and who cares what they think of you.” 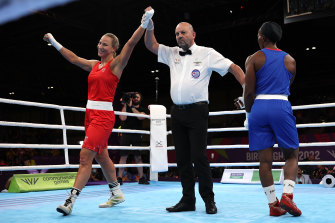 Kaye Scott is another of the five Australian boxers in the medal mix in Birmingham.Credit:Getty

Rahimi is one of five Australians in the Commonwealth semi-finals, joining Kaye Scott (middleweight), Callum Peters (middleweight), Edgardo Coumi (heavyweight) and Caitlin Parker (lightweight) in the next round.

The news wasn’t quite so good for Australian flyweight Alex Winwood, who won the first round against Zambia’s Patrick Chinyemba before being clipped with a left just 19 seconds into the second round. The fight was waved off and Winwood was reduced to tears as he left the ring.

“I feel like I’ve been robbed a little bit of an opportunity to prove myself. I felt like I was fine, the call was a bit quick. I went down and just felt like it was the chance to show them what I’m made of, that I can come back from adversity,” Winwood said.

“It’s a tough sport but she (the referee) made up her mind and the referees are there to protect us. It is what it is.”

Later, South Australian heavyweight Coumi was in another class from Anguilla’s Japheth Olton, winning via a second-round stoppage.

Coumi moved superbly as he ducked a flurry of big shots before taking complete control. But the bout nearly didn’t begin at all when Olton turned up wearing a red mouthguard, which is against regulations. Officials let it begin but Coumi was close to winning himself a bronze medal without even having a fight.

“I just wanted to use my boxing ability, use my jab, didn’t want to get into a rough fight. I saw his big shots coming, was rolling under them, I felt good and fast. I’m just getting started,” Coumi said.

“I wouldn’t have taken a bronze without fighting. I’m here to fight. I have a medal now but I want gold. I came here for the big job.”

Coumi next meets England’s Lewis Williams, who won a bronze medal at the European championships and is a technical, powerful fighter. But Coumi said he had met him in sparring before and was confident of advancing to the gold medal match.

Get all the latest news from the Birmingham Commonwealth Games here. We’ll be live blogging the action from 4pm-10am daily.