George Kambosos jnr has assured Sydney fans they won’t miss out on seeing him defend his world titles in the flesh, earmarking the new Sydney Football Stadium as likely host venue.

Kambosos will make the first defence of his lightweight WBO, WBA, WBC franchise, IBF and Lineal Ring Magazine belts against American Devin Haney at Melbourne’s Marvel Stadium on June 5. Haney holds the only prize not currently in the Australian’s possession, the WBC regular world title. The winner will become just the seventh undisputed world champion across all weight divisions since the four-belt era began in 2004.

Kambosos is a proud Sydneysider, but chose Melbourne for his first title defence, in part because of Marvel Stadium’s 60,000-spectator capacity and the number of people who share his Australian-Greek heritage in the city. However, the undefeated 28-year-old is adamant that supporters in the harbour city won’t miss out.

“I will definitely fight in Sydney,” Kambosos told the Herald. “I don’t think Parramatta [CommBank] Stadium is big enough.

“The new SFS would be amazing. I wish they’d put a roof on it, but we’ll have to find the right date that suits with no rain or bad weather.

“I believe that’s ready for us whenever we want it, we have had some talks. I’m excited to fight at Marvel Stadium, it’s a huge event, but I will fight in Sydney as well. 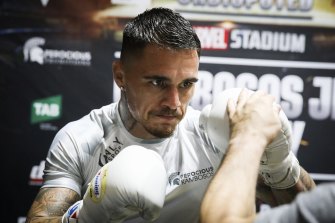 “We’ll see. I’ll fight in Queensland, I’ll fight in Perth, in South Australia – I’m a testament to fighting everywhere. As long as it makes sense, we’ll do it.”

While some local fighters have baulked at the prospect of fighting overseas, Kambosos travelled widely before finally getting his title shot against Teofimo Lopez in the US.

After beating Lopez, the man dubbed “Ferocious” has become a global sensation in arguably the hottest division in world boxing, but his journey to the top wasn’t always glamorous.

“I love fighting in America, I love being that road warrior, but I’ve paid my dues and earned my stripes,” he said.

“I’ve got a few big things coming that I’ll announce to the world … to show the kind of person Haney is.”

“By the time my camp was done, I lost money. It’s a different feeling, but they will still feel what it’s like coming over here and fighting against all odds.”

However, it hasn’t taken long for relations with Haney to sour. 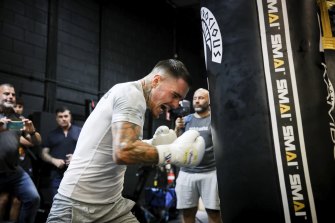 Sydney fans will get the chance to watch George Kambosos Jnr in the flesh.Credit:SMH

“It all started nice and fresh, a bit like a new relationship; you start rosy but after a few weeks you start to see the side of them you don’t want to see, the little things that aren’t right,” Kambosos said.

“I can’t wait. I’m happy he’s coming, but this will be a whole new thing for him. This isn’t fighting in Vegas in front of 2000 people, this is fighting in Australia, against the undisputed champion, in front of 60,000 people.”

Kambosos received yet another honour when he fronted the media at his new gym in Mortdale on Thursday. Charlie Lucas, a director of the Australian National Boxing Federation, presented him with a fighter-of-the-year plaque.

“Each year, the discussion [about the contenders] goes for quite a while because there are a lot of good boxers in Australia, however, this year when we had our phone hook-up, only one name came up – George Kambosos,” Lucas said.

As he accepted the “great honour”, Kambosos said: “I’m sure I will win it again in 2022 because I’ve got that focus, that hunger. I can’t be stopped, I won’t be stopped.”

Reigning WBC heavyweight champion, Tyson Fury, will defend his title against countryman Dillian Whyte. Live and exclusive on Stan Event on Sunday, April 24, from 3am AEST, with the title fight after 7am AEST. Stan subscribers can purchase the pay-per-view event for $60, new customers can sign up to a free trial and purchase the fight. We’ll also be live blogging all the action at smh.com.au/sport