‘I have done nothing, yet’: Tszyu cites Kostya to put Hogan win in perspective

“I’m not satisfied. I haven’t achieved anything in my eyes yet,” Tszyu said. 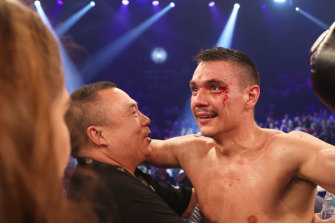 Already he is looking ahead.

“I want an international fight. I want to be recognised globally,” he said.

“I want to be a global boxing star. That’s my goal. It’s always been my goal and if I [am to achieve it I] need those big names.

“There’s a few boys that really interest me.” 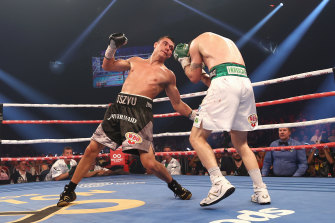 Tim Tszyu easily disposed of Dennis Hogan but already has his eyes on bigger prizes.Credit:Getty

If none of them are amenable, the local and loud Michael Zerafa is a fallback option.

“In a perfect world we’d love the straps [belts],” said manager Glen Jennings, who also oversaw the career of Kostya.

“There’s not too many of those names that are of any concern.

“Tim once again showed that while many will say he’s not at the right level, he keeps winning.

“So they know overseas where he’s at and the stage is [set] for us to plant him over there to show to the American market and very quickly Tim Tszyu’s name will be on the world stage.

“If it ends up being Castano and Charlo having it out and Charlo wins, every chance Timmy will be mandatory for Charlo, which would be a unification of straps.

“Let’s see. it’s all a political game but we’ll see how it all falls.

“Our plan now will be to look at some quality international opponents and based on what we’ve seen [against Hogan], going forward we will be doing our best to bring those opponents to Australia so that we can experience this.”

After the fight, boxing commentator Ben Damon christened Tszyu ‘The Soul Taker’. Asked if he liked the new moniker, Tszyu said: “It’s pretty cruel. I’m not like that as a person.

“But in the ring that’s what I’m all about.”

Now that he has the name, an undefeated record and a growing following, the next step for Team Tszyu is to line up the best international fighters.

“After the fight last night, why not bring the fights here,” Tszyu said.

“Every fighter deserves to experience such an atmosphere and event. Why not bring it here?”