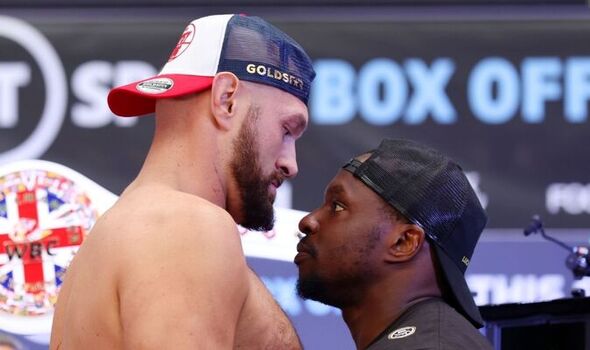 Tyson Fury will defend his WBC and Ring Magazine heavyweight world titles against Dillian Whyte on Saturday night at Wembley Stadium, where there will be a record-breaking 94,000 spectators in attendance. The Gypsy King finally makes his return to the UK after five successive fights on American soil following his points victory over Francesco Pianeta in Belfast in August 2018.

Yet as Fury has noted, “it does not get any bigger” than a fight of this magnitude at the national stadium that is set to smash the European attendance record.

The Gypsy King knows the qualities Whyte possesses all too well given the history between the two British heavyweights.

Whyte was drafted into camp by Fury for sparring back in 2012 and 2013 in preparation for his fights with Martin Rogan and David Haye.

However, their relationship has since soured due to a series of heated online spats.

That said, the pair were full of respect for one another when they met for the first time on Wednesday at the official fight press conference after Whyte touched down in the UK from Portugal.

The Body Snatcher has waited patiently for his shot at the WBC title and his protests have rumbled on for well over 1500 days.

Whyte has been ranked as the No 1 contender with the WBC but still an opportunity has continued to elude him – until now.

Ring walks are expected to take place at around 9:45pm.

The first bell will then reportedly sound no later than 10:10pm.

As always, there is a risk the undercard could overrun.

The undercard is due to get underway from 6pm.