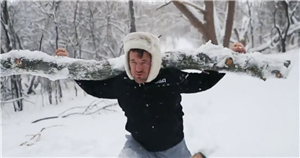 Ben Askren has put together a Rocky 4 training montage while mocking 'Logan Paul’s little brother' Jake Paul in the latest attempt to get a reaction before their April 17 meeting.

The pair went head-to-head for the first time last week as the press tour for their clash begins, and many believed the 36-year-old to have wrestled the upper hand.

The former ONE Welterweight Champion mocked Jake for being nothing more than the ‘little brother’ of fellow YouTuber Logan, who famously lost on his pro debut to KSI in 2019.

Channelling Sylvester Stallone’s beloved boxing champion, Askren wrote: "When I got the call to fight Logan Paul’s little brother I had to go into Rocky Style training!"

Having said at their press conference: Askren said: “I’d heard of Jake Paul prior to accepting this fight, but I couldn’t have told you a lot about him or his brother.

“His brother’s a lot more talented, has a larger following.”

Jake intervened and said: “You literally went on your Instagram and asked people for roasts.”

Before adding: “It doesn’t matter, it’s still a compliment. I would love to be Logan, Logan’s a great kid, we’re both stars, both taking over the world at a young age.”

Askren returned: “Okay, so when Logan’s little brother called me out…”

As the pair left the face-off, Askren pushed Paul in the face and was then slapped in the midriff before they went their separate ways to train for the event.

“He looked like he wanted to throw a punch and then settled on slapping his a**?

READ MORE: Eddie Hall 'loves punching people' and has been pelted with bricks and bottles

READ MORE: PSG star has been in coma for 39 years – was 'only supposed to be there for hours'