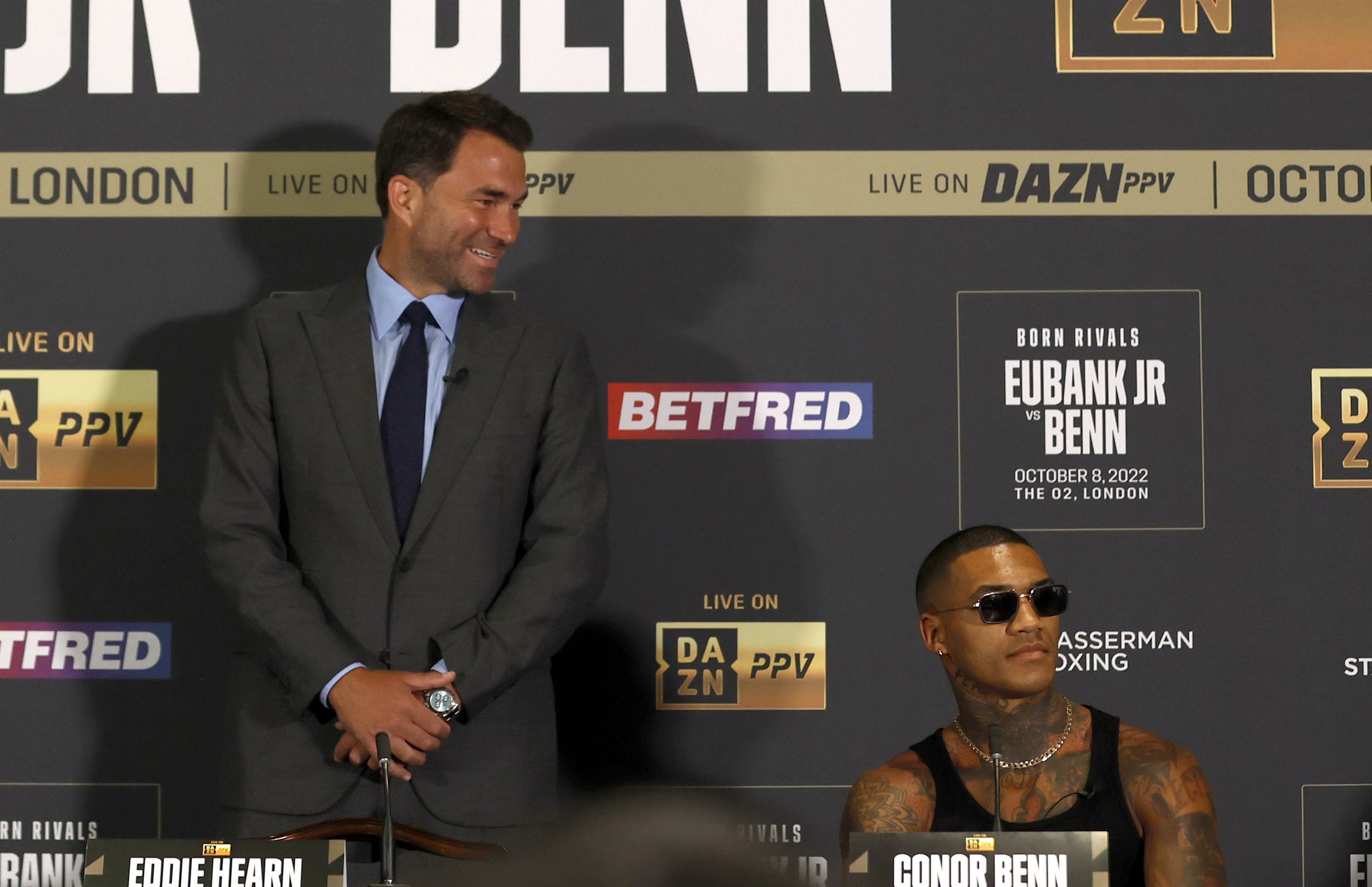 Eddie Hearn believes he has been ‘shafted’ in the fallout from Conor Benn’s failed drugs test and insists he has ‘put his balls on the line’ for the boxer.

News of Benn’s positive test for female fertility drug clomifene was revealed last month, just days before his mega-fight against Chris Eubank Jr in London, which was subsequently called off despite attempts to allow it to continue as planned.

The welterweight has claimed he is innocent after failing two separate Voluntary Anti-Doping Association (VADA) tests for the banned substance and voluntarily relinquished his British boxing licence.

He denies any wrongdoing and continues to fight to clear his name, with the full backing of his promoter, Matchroom boss Hearn, who says Benn is ‘mentally completely broken’.

Hearn admits it too has ‘probably’ been the hardest period of his own time in the sport and is calling for a decision on his fighter’s immediate future one way or the other from the British Boxing Board of Control ‘as soon as possible’.

He also acknowledged it ‘will take a lot for him [Benn] to come back’ whether or not he serves a ban.

Hearn told Metro: ‘I’m not saying anyone handled it perfectly – it’s a very difficult situation – but I do feel we’re getting the blame when we’re not the regulatory body, we contractually can’t cancel the fight at that stage [two days before it was scheduled].

‘The whole thing was a mess, a disaster, and I take our reputation very seriously, I love this sport but with all the s*** we’ve put up with, all the bother, I don’t need it.

‘It’s soul-destroying when people accuse us of not respecting the sport. Conor’s reputation has to be rebuilt but I feel we’ve been shafted.’

Hearn believes Benn will clear his name and insists there is a ‘very strong case for contamination’ in the findings but said he would not work with the 26-year-old again if it is proven he deliberately broke doping rules.

‘I’ve put my balls on the line for this kid because I believe in him and I’ve looked him in the eye on dozens of occasions since it happened with [trainer] Tony [Sims], with his Dad [former two-weight world champion Nigel], and I know how he conducts himself in life and I honestly believe he’s innocent.’

Hearn is in Abu Dhabi, where his company stage their first show in the Middle-Eastern city at the Etihad Arena on Saturday evening, with Dmitry Bivol’s WBA world light-heavyweight title defence against mandatory challenger Gilberto Ramirez top of the bill.

It is a chance to build boxing in another new country, the United Arab Emirates, he says following previous shows, involving Anthony Joshua, being held in the region in Saudi Arabia.

‘The Middle-East is going to be a very important market,’ Hearn explains. ‘The two events in Saudi were different, Abu Dhabi is more commercialised. They’ve had UFC, NBA, the Formula One Grand Prix is coming in two weeks here.

‘We have a long-term partnership, the Champion Series, with the DCT (Department of Culture & Tourism) and we’ll be staging four events here a year from grassroots to elite level, from improving facilities for the younger generation, bringing through Emirati fighters and bringing some of the biggest events in boxing here.