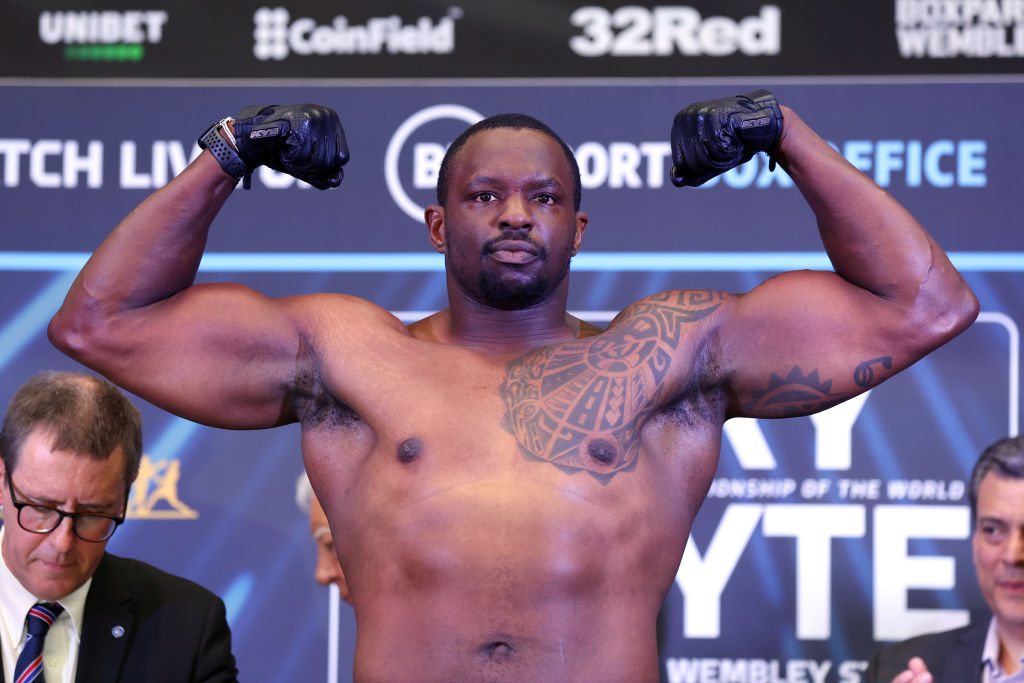 Dillian Whyte has had a long and painful wait for his first crack at world title gold.

The 34-year-old finally gets his opportunity when he attempts to dethrone WBC king Tyson Fury in front of 94,000 at Wembley Stadium on Saturday and it will mark the biggest step in a career littered with highs and lows in almost equal measure.

Whyte’s battle began long before he stepped into the boxing ring. The future contender lived in poverty in Jamaica before becoming engulfed in gang violence after moving to south London aged 12, shot and stabbed twice as a teenager growing up in Brixton and Clapham.

After turning professional in 2011, ‘The Body Snatcher’ often played the villain, a role he embraced during his breakout rivalry with Anthony Joshua. Then still very much the golden boy of British boxing following his Olympics success and an electric start to his pro career, Joshua crossed paths with Whyte with the two coming face-to-face in the ring in December 2015.

Whyte, who was himself unbeaten in 16 fights, made his loathing for his domestic opponent abundantly clear with their rivalry dating back to a 2009 amateur bout that Whyte won. Joshua got his revenge with a seventh-round knockout.

He went onto fight for a world title in his next fight, that glorious night against Charles Martin in London, while it was back to the drawing board for Whyte.

Five victories on the bounce got him back on track however and in October 2017, his victory over Robert Helenius earned him the WBC ‘silver’ belt.

A month later he was officially confirmed as the governing body’s highest ranked contender for the world title then held by Deontay Wilder. Wilder had no interest in fighting the Londoner, however, bluntly telling him: ‘A king doesn’t chase a peasant’. Despite earning his place at the table, Whyte was in limbo.

Over the years, the WBC would sanction seven more fights during the time in which Whyte was supposedly the governing body’s no1 contender.

During that time in championship wilderness, Whyte added to his impressive portfolio of wins, having tweaked and remodelled aspects of his game following on from the loss to Joshua. Two victorious wars against Dereck Chisora, blasting out Lucas Browne and outpointing former world champion Joseph Parker underlined his improvement and why he was very much a part of the world title conversation.

In all, his wait for a title shot will have span an incredible 1634 days – although there were complications following his 2019 victory over Oscar Rivas, a win that finally earned him mandatory status for the WBC title.

After the fight, Whyte was removed from the WBC rankings while an investigation was held into an alleged doping breach. The saga lasted five months before Whyte’s named was cleared with UK Anti-Doping withdrawing their charge against the fighter. It was another period of frustration that briefly left him considering his future in the sport.

‘A few times I’ve thought about walking away from boxing and jacking it in, Whyte said. ‘But my team, they kept pushing me, urging me to go to the gym and taking the mickey out of me, saying my belly was getting bigger.

‘There were a few times I thought forget boxing, I’ve had enough and run off into the night because it’s been so stressful.

‘I came very close. I’m not someone to talk about my emotions, but I have been stressed and down and depressed. But my team kept pushing me and pushing me.’

Whyte’s hopes of having his title shot enforced were rocked a year later after his shock knockout defeat to Alexander Povetkin in August 2020. Whyte righted that wrong eight months later with a blistering display in Gibraltar, effectively retiring the battle-hardened Russian in the process.

He was back on track, but contractual rematches between Wilder and Fury and ill-fated negotiations over a unification showdown with Joshua meant Whyte was kept out of the title picture again for much of last year.

Even after his status as mandatory challenger was officially confirmed again at the end of 2021, negotiations with the Fury camp and promoter Frank Warren were strained from the off and stayed that way right up until fight week.

But at long last, the wait is over and Whyte’s chance to rock the boxing world is here.