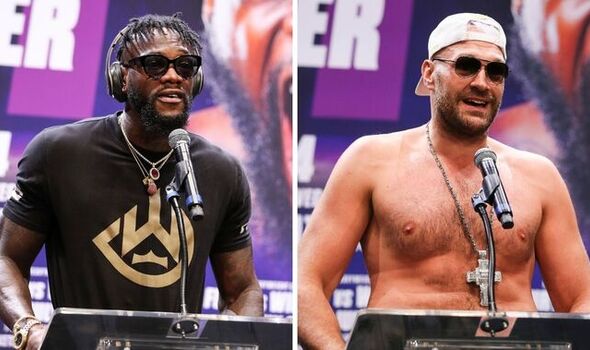 Deontay Wilder has claimed that he must win back his world heavyweight title for the sake of boxing as he fires subliminal shots at long-time rival Tyson Fury. The Bronze Bomber suffered back-to-back stoppage defeats to The Gypsy King, losing his WBC title in the process, and hinting at retirement shortly after. But now the American is back and says the sport is boring without him.

“One thing about boxing that I’ve proved is that boxing thrives off of the excitement. But the excitement of an American champion. Once that dies, so does boxing,” Wilder told Blue Blood Sports TV. “I was living proof because I’m coming back on popular demand because that’s all I’ve been hearing from high and low. From homeless people all the way up to millionaires.

“You feel me? It’s just been an amazing feeling. So many people reaching out telling me it’s important because, without an American, heavyweight boxing really isn’t exciting. An American heavyweight brings that excitement to the division. Then all the money flows. Trust me on that.”

Wilder recently announced his return to the ring at the unveiling of his bronze statue in his native Tuscaloosa, Alabama. He said: “I can’t stop right here. I must continue my journey. I have to, I have to. I’m looking to resume my career for sure. I’ve got a lot of other things I’ve got to get out of the way.

“I’m taking away from my children if I come back because now, I’m able to enjoy my life fully like I want to. I sacrificed so much to be in this position in my life, to be able to live my life like I want for the rest of my life.”

No date or opponent has been set for Wilder’s return, but it is likely he will fight an in-house opponent from his promotional company, Premier Boxing Champions.

PBC has six heavyweights that Wilder is yet to face including Charles Martin, Adam Kownacki, Robert Helenius, Travis Kauffman, Frank Sanchez, and Andy Ruiz Jr — the latter of which is understood to be top of the PBC heavyweight agenda.

Since losing his IBF, WBA ‘super’, and WBO unified heavyweight titles to Anthony Joshua in their December 2019 rematch, Ruiz Jr returned in May last year to hand Chris Arreola his seventh career defeat. The Mexican is scheduled to face Luis Ortiz next on August 13 but could be in line for a showdown with Wilder later this year.