Cordina v Ogawa undercard: 5 boxers to watch out for including prospect who wowed Jones Jr 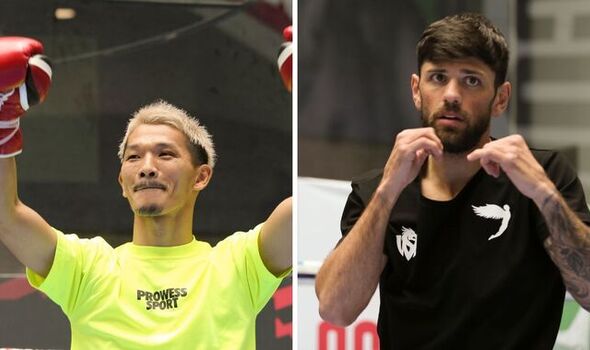 Joe Cordina is hoping to strike gold this weekend as he squares off against defending champion Kenichi Ogawa for the IBF super-featherweight title in his hometown of Cardiff. The former Olympian and European gold medallist, now 30, has the opportunity to become the thirteenth Welsh boxer to capture a world title on Saturday at the Motorpoint Arena.

Champion, Ogawa, will be attempting to make his second successful defence of the red strap as unification bouts against Shakur Stevenson and Roger Gutierrez loom. But below the main event is an undercard full of talented fighters, many of which have flown under the radar. Here, Express Sport counts down five boxers to watch on the Ogawa vs Cordina undercard.

Kyran Jones is a name few will be familiar with coming into this weekend’s action but the recently turned pro was one of Wales’ top amateurs before ditching the vest. Prior to his professional debut in September last year, Kyran was a 10-time Welsh champion, with over 60 international bouts and appearances at three European Championships, a Youth World Championship, and the 2018 Commonwealth Games.

Highlighted for his speed and combination punching, Jones is perfect as a pro at 3-0 having scored his first professional stoppage victory in his last outing against Stanko Jermelic. At 24, the Caerphilly boxer is only going to get better, and while under the watchful eye of trainer Gary Lockett is expected to do big things in the sport. He faces Russian journeyman Vasif Mamedov this Saturday.

Commonwealth gold medallist Skye Nicolson has been setting the boxing world alight since making her professional debut in March of this year. The Australian, now 3-0 as a pro, is one of the most active boxers on the circuit right now having taken no longer than five weeks off between fights since debuting with Matchroom Boxing – and has wowed the legendary Roy Jones Jr with her skills.

Nicolson sent Jones Jr a video of herself training on Instagram back in April and revealed the former pound-for-pound star replied to her that she had ‘blown his socks off’.  Nicolson dons an impressive 107–33 amateur record and won a World Championship bronze medal to go alongside her Commonwealth gold as an amateur. The 26-year-old is being pushed heavily by Eddie Hearn and for good reason. Nicholson will be squaring off against former world champion Gabriela Bouvier on the undercard in what could be her breakout fight.

Former English super-lightweight champion Dalton Smith has had a frustrating career as a professional so far. At 9-0, the Sheffield boxer has regularly chased a fight for the British title to no avail despite showcasing a more than worthy skillset.

As an amateur Dalton won a silver medal at the 2014 European Youth Championships and bronze at the 2015 Commonwealth Youth Games as well as a 2018 ABA Championship gold at light-welterweight. A late addition to the card, Smith faces Mauro Perouene in Cardiff on a three-and-a-half-week camp.

One half of the co-main event, Zelfa Barrett has always been touted for great things. The 27-1 professional was regularly seen on top British prospect lists for the first four years of his professional career but a loss to Ronnie Clark in 2018 dampened hopes. Now on a career resurgence, Barrett has defeated former world champion Kiko Martinez and World Championship bronze medallist Viorel Simion since taking the first loss of his career. This weekend he will be hoping to capture the European super-featherweight title against reigning champion Faroukh Kourbanov.

Gateshead’s Calum French is the latest talent to come out of the Northeast of England. Noted for his ringcraft and punch selection, French is another name that will be new to most boxing fans. As an amateur, he won bronze at the European Championships and silver at the EU Championships but failure to make the last Olympics caused him to turn over with Hearn. Seemingly destined for Tokyo 2020, he was pipped to the light-welterweight spot by Luke McCormack. French faces Spanish journeyman Gadatamen Taylor this weekend in his third professional outing.