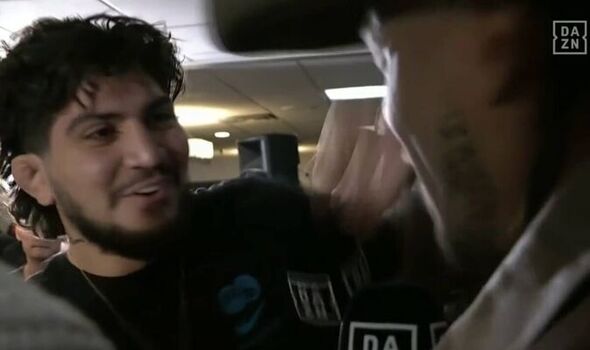 Conor McGregor’s old training partner Dillon Danis was pulled away from YouTuber-turned-boxer KSI on Friday as the two met face-to-face for the first time. KSI and Danis are expected to fight next year, and nearly threw hands on Friday.

Danis has been linked with a number of fights against various MMA fighters and social media influencers over the years. The Brazilian jiu jitsu black belt is signed to Bellator MMA, but hasn’t fought since 2019.

Since then, he’s continued to call out any fighter he can via social media, with KSI his next target. And on Friday, he finally came face-to-face with the YouTube megastar for the first time.

KSI, who is on the hunt for his next opponent after having two exhibition bouts in one night last month, was in Austin, Texas, to promote a fight under his Misfits Boxing banner.

But after the weigh-ins were concluded, Danis made his way up to the stage and went nose-to-nose with KSI. He said: “How are you doing? You’re looking small?”

KSI then said he was excited, to which Danis replied: “Yeah I’m excited too, you gonna sign the contract or no?” Before asking: “You want me to choke you out right here?”

Social media star KSI replied: “Nah you don’t need to. But I could knock you out right now if I wanted to.” At that point, Danis punched KSI square in the jaw with a weak-looking left-hand jab. Security quickly intervened and pulled Danis away as KSI was heard screaming: “get off me”.

The two are widely expected to fight for real early next year, with Danis reportedly having previously agreed to face Logan Paul. That potential bout fell through, however, when Paul suffered a leg injury fighting for the WWE in Saudi Arabia.