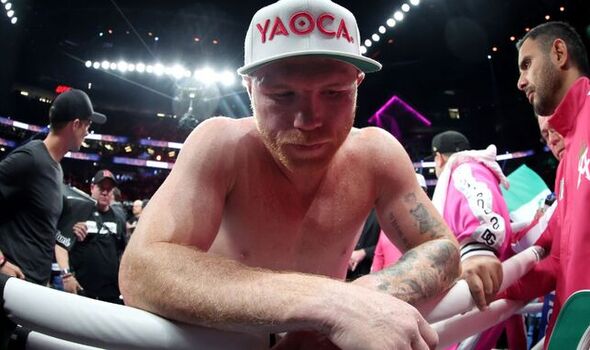 Saul ‘Canelo’ Alvarez has been ridiculed by Kamaru Usman’s manager, Ali Abdelaziz following his loss to Dmitry Bivol last month. The former pound-for-pound king of boxing failed to capture Dmitry Bivol’s WBA light-heavyweight title as he was comfortably outpointed by the Russian.

Despite Scorecards of 115-113 from all three judges most observers had Bivol winning by wider margins in a loss that relegated Canelo to No 6 on the Ring Magazine list. Prior to the result, the UFC’s pound-for-pound No 1 had made it clear he wished to face Canelo in a ‘best in MMA vs best in boxing’ cross-over fight, but after Canelo’s recent defeat, Usman’s manager Ali Abdelaziz says that Canelo has ‘blown the opportunity to fight Usman’.

“I respect Canelo. I think he blew a great opportunity for him. The oddsmakers will probably make it -800 against Kamaru but I think Kamaru has enough balls to go to boxing and we know Canelo will never have enough balls to come to MMA.”

Usman has been out of the UFC octagon since defeating Colby Covington in their rematch back in November 2021. ‘The Nigerian Nightmare’ damaged a ligament in his right hand prior to his second fight with Covington and is currently out of action while he recovers from the reparative surgery.

“Kamaru is good, man, he’s recovering, he’s taking his time. The UFC has been great about giving him space and not pressuring him to fight,” he said.

“You know, he’s the greatest pound-for-pound fighter I’ve ever seen. He has not stopped training. If people think he’s injured [and therefore] not training – he’s training every day.”

Usman is expected to defend his title against British-Jamaican contender Leon Edwards. Usman originally beat Edwards back in 2015, but since then ‘Rocky’ has been on an impressive 10-fight unbeaten streak, including wins over Nate Diaz, Rafael dos Anjos and Donald Cerrone. A date for the contest is yet to be confirmed but should Edwards win the title, he will follow Michael Bisping in becoming only the second British UFC champion in history.