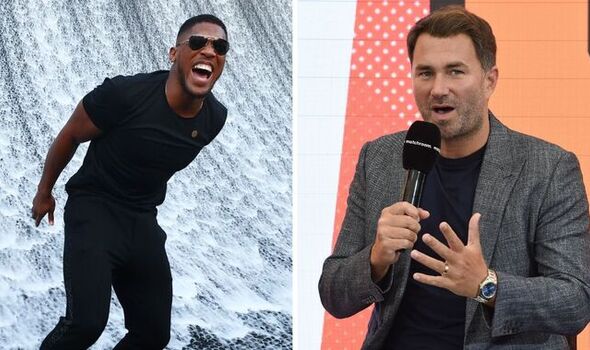 Eddie Hearn has branded Anthony Joshua ‘quite rebellious’ as he opened up about the Oleksandr Usyk gameplan. Joshua was convincingly beaten by Usyk over 12 rounds in September with many boxing experts criticising the lack of aggression in AJ’s approach.

A newly formed team headed up by Angel Fernandez and Robert Garcia is tasked with regaining AJ’s ruthless streak which all starts with crucial mental preparations.

Garcia recently revealed during an episode of his YouTube show Robert Garcia Unfiltered that the defeat to Usyk had affected Joshua’s confidence massively and that the focus of the camp was on regaining it. Speaking on the preparations for the rematch and the original fight, Hearn revealed during an interview with iFL TV that it took some persuading for Joshua to listen to this logic.

He said: “For a long time he was quite rebellious and said, ‘I could have beaten him like that’ and when he sat down with Robert [Garcia] they saw a way to beat him. He has finally accepted the mistakes he made in the first fight and that is what he is saying now. We have always seen a way to beat Usyk but getting in there and doing it is a whole lot different.

Joshua ‘on the brink of joining DAZN’ as contract details emerge

“I am much more confident now he has shared twelve rounds with him. You have to just get in there and be you. That is what he didn’t do in the first fight he wasn’t himself it isn’t difficult just be yourself in the fight and beat him. Yeah, he can possibly win on points but I think he can knock him out.

“But that is what you have to do is cut him off and f hit him anywhere you want around the body. He doesn’t like it around the body, he said after the fight Usyk‘ that was a hard night’s work’ and he didn’t even hit him.”

Joshua is expected to use his size and power more in the rematch which is set to take place in mid-August either on August 13 or August 20.The original preliminary date was pencilled in for July 23, but Hearn opted to delay proceedings to allow for a longer media tour ahead of the bout.

Both men will square off at the Jeddah Super Dome Arena in Saudi Arabia in front of 35,000 fans on fight night. The undercard is yet to be confirmed.