Chris Goulding and Jo Lual-Acuil starred as Melbourne United won their seventh game in a row by beating Adelaide 36ers 97-78 in Adelaide on Saturday night.

Goulding and Lual-Acuil notched 18 points each as the visitors took control of the game in the second quarter with a 19-2 run and were never troubled again. 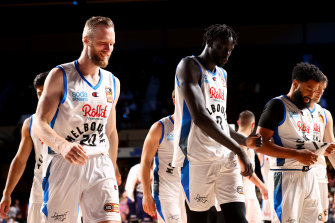 David Barlow and Jo Lual-Acuil of United walk from the court after the win over the Adelaide 36ers.Credit:Getty Images

Adelaide big man Cam Bairstow had 18 points for the Sixers.

Goulding praised his team’s bench for scoring 40 points. “We spoke about how we needed to apply pressure and have our foot on the gas but our starters were the complete opposite of that,” Goulding told ESPN.

“But our bench came in as they so often do and gave us some energy and got it back on our teams. We have a bench group who can start anywhere, that was impressive from them.” 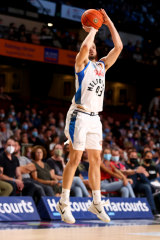 Townsville Fire pulled off one of the best comebacks of the WNBL season, recovering from a 20-point deficit to beat Melbourne Boomers 68-66 at Parkville on Saturday.

Opals World Cup aspirant Lauren Nicholson stepped up for her road-weary team, scoring 22 points as her side dragged themselves back as centre Zitina Aokuso added 17 points for the Fire, who played against Bendigo the previous night.

The Boomers had a chance to win or force overtime in the final seconds, with Tess Madgen being forced into a contested three-point shot on the buzzer as Cayla George led the Boomers with 24 points and 14 rebounds.

Patty Mills made an emotional return to San Antonio on Saturday AEDT as his Brooklyn Nets scored a 117-102 win.

The Australian star spent a decade with the Spurs and was celebrated in his only visit to the city this season, while fellow former Spur LaMarcus Aldridge was also honoured by the club with the pair given a pre-game tribute video.

Mills also shared pre-game hugs with several players and coach Gregg Popovich, although the veteran mentor initially evaded Mills before accepting the hug and Mills had a quieter night than usual with nine points, all in the second half.

“To be able to get a welcome back was special,” Mills said. “A lot of memories flooded back just from being in this building. It was cool to share the moment together with him [Aldridge].”

Rookie guard Josh Giddey set a new career-high in scoring with 21 points as his Oklahoma City Thunder lost 121-98 to the Charlotte Hornets in Charlotte on Saturday.

The game was only the third time this season Giddey has taken 17 or more shots as he has previously focused on his passing to other teammates.