This Sydney King was a top NBA prospect. Then the pandemic hit

Makur Maker is one of Australian basketball’s rising stars, was recruited by a US college and was the subject of a five-part documentary series, but his mother had never seen him play before his Sydney Kings debut in December last year.

“For her to come to a basketball game, that was a good feeling,” Maker says. “Just having little brothers, who have never seen you play before, watch you – it’s the best thing you can have as a basketball player.”

The Long Game documentary made for Apple TV+, followed Maker’s journey from the suburbs of Perth to the cusp of the NBA. It ends with Maker and his cousin Matur moving back to Australia to join the Sydney Kings, but it is just the beginning of what the 21-year-old hopes is a long and successful career.

On Friday night, Maker will add another chapter to an already fascinating career when he runs out for the Kings in the first NBL grand final match against the Tasmania JackJumpers at Qudos Bank Arena.

After an injury-riddled start to his professional career in Sydney, it is an opportunity he isn’t taking for granted.

“I had a couple of ups and downs going through rehab and stuff, but I’m playing basketball now, the team is playing great, and I’m contributing to it,” he said. “It’s the highest level of basketball trying to win a championship … I feel like we’ve got a great chance, and we’re gonna lock in this next series.” 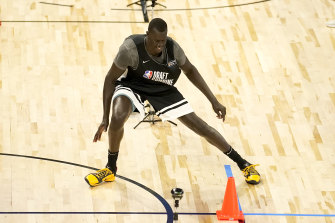 Maker participates in the 2021 NBA Draft Combine in his time at Howard UniversityCredit:AP Photos

The Kenyan-born South Sudanese-Australian was a predicted top-20 pick in the 2020 NBA Draft before COVID-19prematurely ended high school basketball competitions and derailed his hopes of following his cousin Thon’s path into the NBA. Thon played for three NBA teams between 2016-2021 and is currently a member of the Long Island Nets in the NBA G League competition.

Despite offers from some of America’s top college programs, Maker took a gamble and committed to Howard University in July 2020, becoming the highest-ranked recruit to commit to a Historically Black College and University (HBCU) in decades.

A lingering groin injury limited his college career to just two games (23 points and 12 rebounds) before the season was eventually called off after only five games due to the pandemic and Maker made the decision to return to Australia and sign with the Kings alongside his cousin.

“Things like COVID happening and our season being cancelled, I didn’t picture going to Howard,” he says. “You just always got to be ready to adapt to things, that’s what I’ve learned these past two years.”

Leaving college to begin a professional career in Australia is an unconventional move for a former five-star recruit, but Maker saw an opportunity to follow NBL Next Star program graduates LaMelo Ball, Josh Giddey and RJ Hampton into the NBA.

“I just wanted to come back home, [and] I felt like the NBL was great at showcasing the Next Stars,” he says. “It’s almost like an NBA pedigree, so you can come in and learn a lot of things, and you’re surrounded by great players.”

As for the Kings, Maker is eager to learn from a colourful cast of current and former players including Luc Longley, the three-time NBA champion ‘riding shotgun’ with the Kings’ coaching staff, who has taken the 211 cm talent under his wing.

“He [Longley] has been coming to a couple of practices, and he’s just kind of behind-the-scenes, helping me out with being a professional and giving me advice,” he says. “Having guys like Luc and Boges [Andrew Bogut] and a very enthusiastic owner, Paul Smith, it’s just as fun as it gets.”

Maker has shown he isn’t afraid to take the road less travelled and while he hopes to follow Longley’s path from Perth to the NBA, he wants to leave Sydney an NBL champion and inspire other young people of South Sudanese heritage to follow in his footsteps.

“I want to be that guy they look up to,” he says. “[I want to be known as] somebody who just stuck to the program, stuck to the script, went through a lot of ups and downs but kept fighting through it, and then finally achieved his goal.”