It is March 17 last year. COVID-19 is marching across the world, and now it’s stomping its way through Australia.

Professional sport is in a spin. To play or not to play? That is the very expensive question. 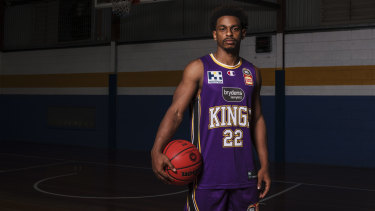 Casper Ware has returned to the NBL to complete some “unfinished business”.Credit:James Brickwood

In some respects, the NRL and AFL have it easy. They’re at the start of their seasons. The NBL is three matches into their grand final series, with Perth Wildcats leading the Sydney Kings 2-1.

Inside the retro confines of the Auburn Basketball Centre, the Kings are sitting in the players’ lounge, pondering a question none of them ever thought they’d be asking themselves.

Keep playing — or pack it in? Win the championship — or become basketball’s version of the Ruby Princess?

Kings management wants the players to drive the decision. They have the most to lose, after all. This meeting is their chance, one by one, to explain how they feel.

As they work their way around the room, the playing group is divided. This team has come too far, has too many quality players, to turn back now.

“Back home in the States, people are panic-buying guns,” the 31-year-old point-guard, a Los Angeles native, tells his teammates. “There are lines of people wrapped around the block to the gun store. I’m a competitor. I want to finish this as much as anyone. But what’s more important right now: win a championship or the fact that COVID is killing people?”

The situation is suddenly brought into pin-sharp focus. International borders are being snapped shut. Flights cancelled. When will Ware and all the other international players in his team, Jae’Sean Tate, Deshon Taylor and Didi Louzada, see their families again?

A few days earlier, Ware had spoken to him mum, Autheia, 62. He suggested to her that he’d come home when the season was over and buy the groceries. 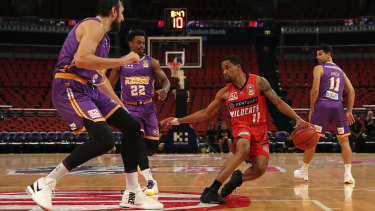 The Wildcats took the 2019-20 NBL title 2-1 in March 2020 after the Kings pulled out of games four and five due to the coronavirus pandemic.Credit:Getty

“There’s nothing on the shelves,” was the sobering reply.

Later that day, the Kings advise the NBL they’re withdrawing from finals series because, as far as they’re concerned, it’s the right thing to do. The next day, Ware flies home unsure if he’ll ever wear a Kings singlet again.

“There was so much panic going on,” Ware recalls now. “Was this going to be a war? What if things get shut down and we can’t get back to our families? When the NBA stopped, you realised how serious this was. This was not a joke. Basketball is important but it’s not that important. Luc Longley [an adviser to the Kings] said, ‘Put that all to one side and think about my family first’.”

The reason Ware is back in the NBL, why he will take court on Friday night against the New Zealand Breakers in the Kings’ first home match this season, is the fallout from that March 17 meeting.

The Kings felt they were making the hard decision both the NBL and Wildcats didn’t want to make. The NBL and Wildcats thought the Kings wanted to kill the season because they were trailing 2-1, although Sydney had expressed a desire to call it off after losing the opening game of the series.

The NBL ruled the Kings had forfeited and handed the title to the Wildcats.

“It leaves a bad taste in your mouth,” Ware said. “We did the right thing. The league should’ve been the ones taking the lead on it. We had a strong team. I was confident we’d go to Perth and beat them. But to keep flying back and forth was high risk.”

The silver lining is that it left Ware with a scratch that still needs itching.

When the NBL announced 50 per cent pay cuts because of the financial cost of COVID, it looked unlikely he would return.

“There was a time when I had my mind made up: I’m not going back to Sydney,” he says. “There were other places in the world where I might have to go. The NBL didn’t know when it was going to start. Certainty is big in life. You have to make sure you have something in concrete. But I’ve worked it out, my agent worked out a deal in August, and now I want to finish what we’ve started.”

Last year, living back in the US didn’t include much basketball, but it was eventful nonetheless. Two months after getting home, Ware was on his way to Ohio for the popular The Basketball Tournament — a $2 million knockout — but contracted COVID-19. Apart from a slight fever and body aches, he felt OK, but had to isolate from his family for two weeks.

Then came the Black Lives Matter protests in June.

“It was just a good time,” Ware says. “I know there was vandalism, which we don’t agree with, but that was a great moment in history for us. Being a black man in the United States is tough.

“I grew up in Cerritos, near Long Beach, where there aren’t many blacks. At Christmas, me and my brothers would play basketball on the streets and people would call the cops. It’s a feeling I can’t describe when you get pulled over by the police, you just don’t know. How are they going to react? What cop am I going to get? Everything stops, you start shaking, your hands get nervous.

“I’m glad the NBA opened up and showed themselves. DeMar [DeRozan, who plays for San Antonio Spurs] is one of my closest friends and to see him march in Compton, alongside Russell Westbrook … To see guys like that fighting for the cause, helping our people, means you want to talk about it and be involved.”

In person, Ware confirms the age-old truism of sport that you should never judge a person by what you see in the middle of the arena.

Articulate and affable, he’s not at all like the abrasive character on the court who annoys refs and infuriates Courtside Karens.

That might be a hard sell for Melbourne United fans, and indeed their club, for which Ware played before joining the revolution at the Kings.

In game two of last season’s semi-final series, Ware was restricted to 10 points in the Kings’ horrific 125-80 defeat.

He was literally feeding the rival fans in the process. As part of a Hungry Jacks promotion, supporters get a free cheeseburger when an away player misses two consecutive free throws from a single penalty.

Ware was missing so frequently from the stripe, the court announcer started calling him “Casper Burger”. The relentless mocking became personal that the Kings lodged an official complaint after full-time.

Ware laughs it off now.

“What were they saying?” he says. “Something about cheeseburgers?”

“Maybe we were beating them too much. They had a couple of good games against me and they were very excited. Well, you can take them cheeseburgers with you and eat them at home while watching us play in the finals. I didn’t take it to heart. It definitely crossed the line but I had the last laugh.”

The Kings (2-3) have been on the road since Boxing Day because of the uncertainty around state borders, but play the Breakers (1-3) at Qudos Bank Arena on Friday night and then the Hawks (4-2) also at home on Sunday afternoon.

The return home coincides with Ware starting to find form. 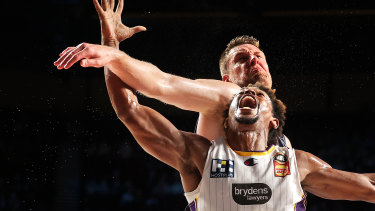 Casper Ware found some form against the 36ers last weekend.Credit:Getty

Last Saturday night, in the first quarter against Adelaide, a jump shot from Ware went halfway down the pipe before gurgling back up again.

By the end of the night, Ware had notched 27 points, including two three-pointers in the last quarter to ice the 94-75 win.

“It’s unspoken here,” Ware says, “but there’s unfinished business. We want to finish it off the right way now.”

THE QUOTE
“If you have to have the ref on your team is that really winning!!! @giseleofficial.” — Patrick Mahomes’ mum, Rangi, throwing Twitter shade at Tom Brady’s wife, Gisele, after the Bucs pumped the Chiefs.

THUMBS UP
There was only one thing more impressive than the Sydney Sixers’ 27-run victory over the Perth Scorchers in the BBL final — the sight of them still in their magenta uniforms, in some cases still in their spikes, celebrating underneath the Harbour Bridge as the sun came up.

THUMBS DOWN
“I love Australian Rules footy. It is the most egalitarian of games. No matter the size, the shape or any other subset of life …” Even when Eddie McGuire is resigning in shame, in tears, he sounds like he’s taking the piss.

It’s an even bigger weekend for … Nicholas Hilmy Kyrgios as he goes through an entire spectrum of emotions in the third-round clash against No.3 seed Dominic Thiem on Friday — and that’s just in the warm-up. 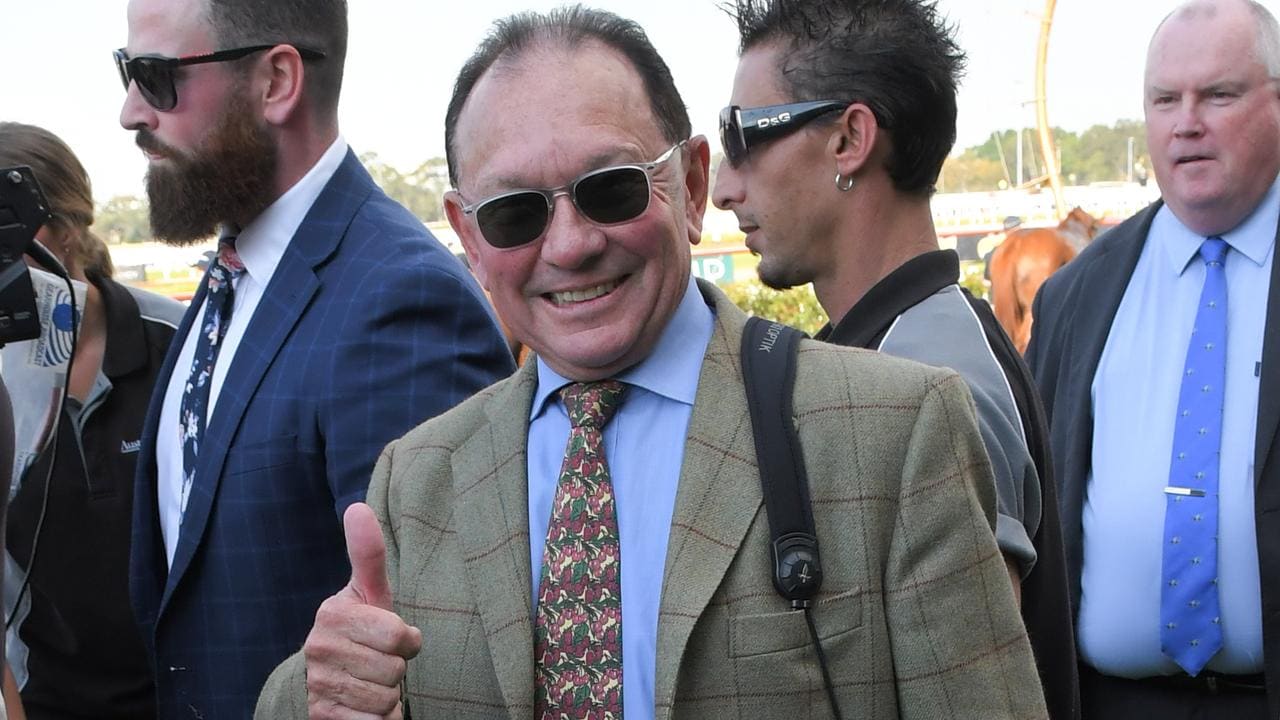