On the bus: The masterstroke that drove Kings to verge of grand final

Normally when the Kings travel for away games to Wollongong, the players make their own way to the venue.

However, that changed for the first game of the play-offs against the Hawks on Friday night.

“Being on the road brings us closer,” said Sydney sharpshooter Dejan Vasiljevic. “You spend more time together off the court. 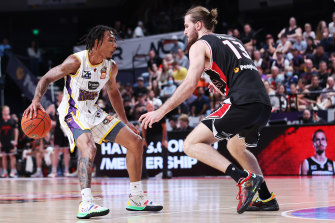 “We bussed up for the first time. Usually when we got to Illawarra we all drive separately in our cars.”

“Chase made a good point; it’s the play-offs, we need to get even closer and tighter.

“We all caught a bus, we all stuck together. We played some cards on the way down. Being closer, we all just locked in on our assignments and got it done.”

In defeating the Hawks 89-79 on Friday night, the Kings have moved to within one win of a spot in the NBL grand final series. That victory could be secured on Sunday, when Sydney hosts the second game of the series at Qudos Bank Arena.

It’s a chance for the Kings to come home after a record-breaking season on the road. Sydney’s win on Friday night was their 11th away from home, which is the most in a single NBL season.

The victory came courtesy of a stunning 18-0 run in the second quarter. That advantage was nearly squandered when the Hawks pulled to within three points with three minutes remaining, but the visitors regrouped behind a 30-point haul from NBL MVP Jaylen Adams, who will have the award presented to him by Andrew Bogut before Sunday’s 3pm tip-off.

“Jaylen was just being Jaylen; he is the best player in the league,” Vasiljevic said. “The last time a Sydney Kings player was MVP, they went on to win the championship. I don’t want to jinx anything, but he’s the man in charge, we’ve got to follow him as much as we can.”

Vasiljevic has also had recent success against the Hawks. The 25-year-old scored 33 points against thema few weeks ago and finished with 12 points from five-of-six shooting on Friday night.

“They focus too much on me and they give Jaylen, Ian [Clark], Jarrell [Martin] and X [Xavier Cooks] a chance to do their own thing,” he said.

“If I can get hot early, it helps them out because if they want to go double-up on Jaylen or Ian early and leave me wide open, I’m going to try to make them pay. I’m just going to try to do what’s best for the team.”

The Kings haven’t won a title since 2005, when Brian Goorjian was in charge. Now Goorjian is the coach of an Illawarra side that stands between Sydney and a grand final appearance.

“It’s been 18 years since the city had a championship and it would be great to bring it in,” Vasiljevic said. “The crowd is starting to see it. Last year we were getting 8000 to 9000 coming to games; now we’re getting around 13 to 15,000. Tomorrow it’s going to be rocking.

“We’re all locked in, the job is not finished.

“We’ve still got one more to win and then the grand final.

“I’m only 25 years old and have won numerous national titles. It would be great to win one at the pro level and keep adding to the resume.

“The main thing is to win a championship for this city with the group. I wouldn’t want to do it with anyone else.”