Dual citizen Matisse Thybulle has enjoyed being united with a cricket bat and ball, but it’s on the basketball court where the Australian Boomer hopes to leave rival Olympic teams stumped.

Thybulle’s athleticism, perimeter defensive hustle and ability to block shots and score are important tools in the Boomers’ quest for a breakthrough Olympic medal in Tokyo. 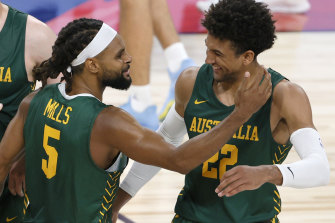 Matisse Thybulle (right) is excited to represent the Boomers.Credit:Getty Images

The clever guard, 24, was a central figure in the Boomers’ undefeated run against Argentina, Team USA and Nigeria through a series of exhibition matches in Las Vegas, where his scoring was a particularly welcome sight. While he was named to the NBA all-defensive second team this season, the Philadelphia 76er averages 3.9 points per game.

“For me, it’s pretty obvious what I bring to the table. That’s athleticism, defence and, as I keep growing, what I can do around the three-point line,” Thybulle told The Age and Sydney Morning Herald.

“It’s just great to see how well my skill set has integrated, just being able to complement them [teammates] as best I can is ultimately my goal. It’s been so fun for me to do that and have so much success early.”

The blue-chip perimeter defender was born in Scottsdale, Arizona, but lived in Sydney from the age of 2 until he was 9 with his parents Greg, a Haitian-born engineer raised in New York, and mother Elizabeth, a naturopath.

He grew up on the North Shore, attending North Sydney Demonstration School, and remembers days out to Manly and Bondi beaches and playing in the parks.

His father, who regularly travelled, ensured his son qualified for a dual passport before the family returned to the US, something Thybulle – named after the French artist Henri Matisse, whose work inspired Greg while he was backpacking through Europe – didn’t really appreciate as a youngster.

“He used to make such a deal of that when we were kids. I was like: ‘Who cares?’ As a kid you take everything for granted, right?” Thybulle said.

“Now that I have got older, it’s a really big deal. Even before the Olympics, people thought it was so special that I have that. Now that this opportunity has come and I am able to use this and be a part of it, it just makes it that much better.”

It was former 76ers and Boomers coach Brett Brown who alerted Basketball Australia and the likes of Patty Mills, Joe Ingles and Matthew Dellavedova to Thybulle’s dual citizenship a couple of years ago, and the wheels turned quickly. Fellow NBA stars Ingles, Dellavedova and Mills, when competing against the 76ers, were among those to encourage Thybulle to join the Boomers, and the deal was soon done.

While Thybulle is disappointed he won’t have the chance to play alongside 76ers’ teammate Ben Simmons, he understands Simmons’ decision to bypass the Olympics in favour of working on his own game, having had a rugged NBA play-off campaign.

Amid the tough training sessions under Boomers coach Brian Goorjian, and dealing with life in a hub through the US and now in Tokyo, Thybulle has been reintroduced to an Australian pastime – having a bat and bowl.

“The bowling is getting better, the batting is sub-par,” Thybulle joked, adding his bowling consisted of “a lot of change of pace”.

Thybulle lost his mother to leukemia in 2015 but her love of Australia lives on.

“I think she would be excited. My mum was never a huge basketball fan,” Thybulle said.

“She enjoyed me pushing myself and growing in anything. In my case, that happened to be basketball where it happened the most. She would be happy for me to embrace my Australian side and to see how valuable our time was there when we were kids.”