At the end of 2019, Sydney Kings star Xavier Cooks had just signed his first big deal with the club, lining up alongside the likes of Andrew Bogut and Jae’Sean Tate for his debut at the age of 24.

Little more than two years later, Cooks has been thrust into the role of poster boy and appointed co-captain as the Kings battle an injury crisis.

While he is relishing the added responsibility, Cooks admits the speed of the switch from rookie to key player has been a challenge.

The Kings have lost RJ Hunter and Jordan Hunter for the season through injury. Jaylen Adams, Makur Maker, Angus Glover and Biwali Bayles have also spent plenty of time on the sidelines. The injury crisis has also highlighted the absence of former star Casper Ware, who is playing in Europe. 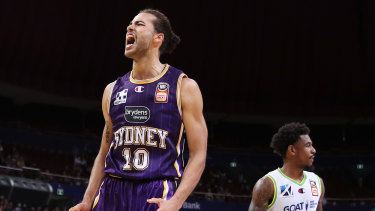 He may be just 26, but Xavier Cooks has been forced to step up and lead the Sydney Kings in recent months. Credit:Getty

With Cooks a fan favourite, the Kings have relied heavily on him to keep their supporter base engaged as they bring in new faces and struggle to keep in touch with the competition pacesetters.

“I’ve really had to come from the little dog to the big dog in the past two or three years,” he said. “From the start of the year, coach [Chase Buford] looked at me for one of the [leadership] roles with this really young team. It means a lot.”

With six new players this year – many of them youngsters – the fresh faces have looked to Cooks for guidance. Luckily for them, Cooks has had plenty of recent experience in a nurturing role after becoming a father. He said the maturity he has gained from looking after his daughter had translated onto the court and helped make the transition to senior player.

“I’ve always been the kind of guy that wasn’t the most mature growing up. She just gives me a perspective that life is not all about basketball,” he said of his one-year-old daughter.

“In the past, if I’ve had a bad game, I let it bottle up and think about it all the time. Now, if I have a bad game, when I go home my little daughter is smiling. If I have a good game, she’s still smiling.”

Cooks’ leadership has been pivotal in recent weeks after a string of tough defeats. They lost 96-87 to the Bullets in Brisbane on Friday, but will get a shot at redemption when they face them again on Sunday.

Last week, the New Zealand Breakers beat the Kings for just their second win of the season. Buford described the performance as “embarrassing”.

“It was definitely a tough loss,” Cooks said. “It was a bit of a kick in the teeth, I feel like. But I felt like we’ve had good training since then; we put it in the past as I’m looking to move forward.

“I’m just trying to figure out what our problems are right now in the season, and hopefully get back to winning.”