Los Angeles: Four-time WNBA All-Star Liz Cambage is taking a step back from the league “for the time being” and wishes her departure from the Los Angeles Sparks last month had ended on a different note.

“I’ve decided to step away from the league for the time being and I’m hopeful that the WNBA will do their part in creating safer environments and a stronger support system for their players,” Cambage wrote in an Instagram post on Monday.

“While I’ll miss rocking the purple and gold, I’ll be taking this time to focus on my healing and personal growth before providing clarification on past rumours.”

The towering Australian joined the Sparks in the last off-season and averaged 13 points and 6.4 rebounds in 25 games this term.

The team hit a skid following her departure on July 26 and failed to make the play-offs, which begin on Wednesday.

“Playing for the Sparks was a dream come true and I’m honoured to have shared the court with such amazing ladies for as long as we did,” she said. 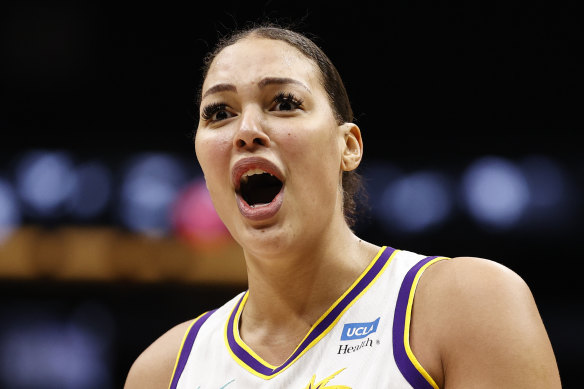 Liz Cambage has taken a break from the WNBA.Credit:Getty Images

“I’m sorry to have left abruptly and I wish it would have ended on a different note.”

In May, former Australia captain Jenna O’Hea said a Cambage jibe about Nigeria being a Third World country led to a brawl at a pre-Olympic warm up game in Las Vegas last year.

Cambage, who was born in London to an Australian mother and Nigerian father, subsequently pulled out of the Australia squad for the Tokyo Olympics citing mental health issues and was later formally reprimanded by Basketball Australia over the incident.

The London 2012 bronze medallist has acknowledged “there was a physical altercation and there were words exchanged” in the game against Nigeria.