Philadelphia: Ben Simmons has let it be known that he wants out.

In a meeting with the 76ers last week in Los Angeles, Simmons told team co-managing partner Josh Harris, president of basketball operations Daryl Morey, general manager Elton Brand and coach Doc Rivers that he no longer wants to remain a Sixer, according to multiple sources. 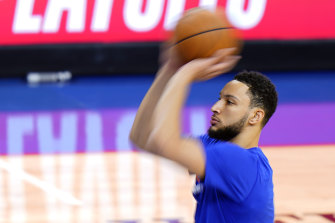 Ben Simmons is unlikely to join the 76ers at a training camp, and wants to leave.Credit:AP

Sources said the three-time All-Star also does not intend to report to training camp.

For the second time since December, the Sixers are unsuccessfully trying to trade Simmons, whose trade value has diminished. At the beginning of this past season, they tried to send him to the Houston Rockets in exchange for James Harden. The Rockets ultimately traded Harden to the Brooklyn Nets on January 11.

The Sixers are having a tough time finding a team to meet their lofty trade demands.

The organisation does not want to trade Simmons for less than what it believes is fair market value. The four told Simmons they wanted him to report to the start of training camp on September 28 and be a part of the team.

The source said, however, the Sixers’ inability to get fair market value isn’t Simmons’ fault.

Another source said there’s no shortage of teams still interested, but the problem is Morey is demanding a king’s ransom.

Simmons is fully aware the Sixers can fine him for holding out and failing to show up to training camp. But a source said money will not play a role in the decision-making for Simmons, who has four years and $US147 million ($201 million) remaining on his deal.

Plus, fining Simmons could strain the Sixers’ relationship with his super agent, Rich Paul of Klutch Sports. Paul has a who’s who of clients — players the Sixers might be interested in pursuing down the road in free agency.

When asked specifically whether he thought Simmons would come back at all, a source responded “no,” resolutely.

None of this should come as a surprise.

Time will tell if the 25-year-old reports and/or if the team avoids what is bound to be a circus-like atmosphere by trading him in the weeks leading up to camp.

The belief around the league is the Sixers have been holding out for six-time All-NBA point guard Damian Lillard to request a trade from the Portland Trail Blazers. But Lillard said, “I’m not leaving [Portland] — not right now at least” on Wednesday during an Instagram Live stream. 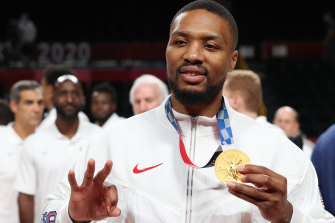 The Sixers have been keen on securing Damian Lillard.Credit:Getty Images

The Sixers’ best consolation could be circling back to the Blazers for a potential deal involving shooting guard CJ McCollum before the start of training camp. That trade would make sense for both teams.

In addition to fulfilling needs, the players have similar salaries. Simmons will make $US33 million next season, while McCollum will receive $US30.8 million.

The problem is both teams might think they should get more in return.

McCollum, 29, has averaged 18.9 points while shooting 38.9 per cent on three-pointers in 528 career games with 431 starts. However, the eight-year veteran out of Lehigh is not an All-Star after years of playing in the tough western conference.

League sources believe the Sixers will have a tough time getting what they perceive as fair market value under the circumstances.

“Think about three months ago when the Sixers are willing to give up Ben Simmons. You are like, ‘Let’s see what we have to do to get him’,” said a western conference executive, who spoke on the condition of anonymity. “Now, the difference is Ben Simmons says he refuses to play for the Sixers. He wants to go to three California teams. There’s so much bad blood between him and the team.”

The executive said teams are not willing to give in to the Sixers’ steep asking price knowing they have to move Simmons.

“The kid said he’s not going back,” the executive said. “I’m not giving you what you’re demanding. They really messed this up.”

A source believes the devaluing of Simmons began with Rivers’ post-game comments following the game-seven loss to the Atlanta Hawks in the eastern conference semi-finals on June 20.

That’s when the coach, who has been one of Simmons’ biggest supporters and defenders, was asked if the standout is still capable of being a point guard on a championship-calibre team.

“I don’t know the answer to that right now,” Rivers responded on a night when Simmons finished with five points, 13 assists, eight rebounds and was sidelined the final 40 seconds of the 103-96 loss.

He attempted just four shots, making two. For the fourth straight game, Simmons did not attempt a shot in the fourth quarter. He played timid, appearing fearful to go to the foul line.

The source believes it will be tough for Simmons to have a working relationship with the team moving forward. At the same time, the team isn’t trying to let their multifaceted player go for little in return.

The Sixers would have holes to fill by getting rid of Simmons.

In addition to being the point guard, Simmons is a two-time NBA All-Defensive player, a third-team All-NBA selection, a small-ball centre and reserve power forward.