A Bucks reunion at the Boomers, Magbegor stars with Storm

Matthew Dellavedova and Thon Maker will have a Milwaukee Bucks reunion when they join forces again for the Australian Boomers later this month.

Dellavedova and Maker headline the 12-man roster for the Boomers, who play three FIBA World Cup qualifiers against China and Japan at John Cain Arena on June 30, July 1 and July 3. 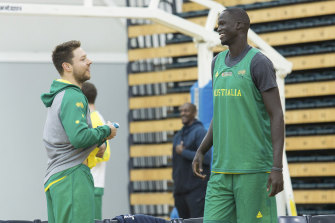 The pair played together with the Bucks in 2016-2017 and will be two key members of the side.

Maker hasn’t played for the Boomers since the brawl against the Philippines in 2018, but part of that was due to his need to focus on his NBA career. Dellavedova will be the only carryover from the bronze-medal winning side at the Tokyo Olympics along with coach Brian Goorjian.

Maker spent much of last season on the sidelines because of injury and he is primed to return to the court, telling ESPN in May that he felt playing for the Boomers would help him show NBA scouts what he can do.

The rest of Goorjian’s squad is a mix of NBL players with Boomers stalwarts Mitch McCarron, Todd Blanchfield and Clint Steindl suiting up. The Boomers are 3-0 in their group, and the Melbourne games will end the first round of qualifying.

The next big question will be who suits up for China and Japan. South East Melbourne centre Zhou Qi has been named on China’s roster, but it isn’t yet clear if Japan’s NBA duo Rui Hachimura and Yuta Watanabe will play.

If Xavier Cooks doesn’t make the NBA, he will be back with the Sydney Kings after signing a three-year deal with the NBL champions this week.

Cooks won the Larry Sengstock Medal as MVP of this season’s grand final series as the Kings won the title and he has eyes on a move to the NBA, following Jock Landale who won that same award when at Melbourne United and turned it into a move to the San Antonio Spurs. 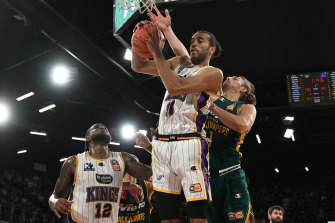 “I’ve always said playing for Australia at an Olympics is my biggest goal and that’s something I want to do,” Cooks said.

“And as a child, I always wanted to play NBA, so I’m not putting that aside just yet. But now I’m back at Sydney the goal right now is to repeat and win another championship.”

Former Cairns guard Kouat Noi has signed a two-year deal with the Kings.

The NZ Breakers have signed Boomers guard Cameron Gliddon on a two-year deal. Gliddon had a frustrating season with South East Melbourne Phoenix as injury and illness repeatedly struck him down. The Phoenix have signed Sydney-raised guard Junior Madot.

Australian star Ezi Magbegor bounced out of COVID-19 protocols and joined rare company recording five blocks in a 72-60 win over the Atlanta Dream on Wednesday (AEST).

The Opals centre also had 12 points and seven rebounds in the win including some crucial three-pointers after positive signs during the Melbourne Boomers’ WNBL title win this past season.

Magbegor was out since May 20 after being put into the league’s COVID-19 protocols. She scored 19 points in her return game over the weekend, and followed with her big performance against the Dream.

“I felt good physically. I was surprised how well I recovered,” Magbegor told media on Wednesday.

“The first few days were rough but the last few days in isolation I was just hanging out, waiting to be back with these guys. You want to get out and exert all that energy and I feel like that is what happened.”

Storm star Breanna Stewart was excited about Magbegor shooting a perfect two from two from the three-point line, exclaiming “big shots man” after Magbegor was asked about her shooting.

“With my threes, it’s something I’m really trying to work on so the paint [key] is not so congested and it opens more chances for my teammates,” Magbegor said.

Storm coach Noelle Quinn praised Magbegor’s shot-blocking as a product of having a better understanding of how the team’s defensive structures work, and she said the Australian centre was working hard and seeing the dividends.

“Ezi works on it,” Quinn said. “She is able, willing and capable of shooting the ball and it lets us have multiple threats on the floor.”

Fellow Australian Kristy Wallace had 12 points and six assists for the Dream as she continues to thrive in her first WNBA season.

Both players look set for big roles with the Opals at the FIBA Women’s World Cup in Sydney in September.