Kelsey-Lee Barber has made athletics history with the Australian defending her world title to win back-to-back javelin world championship gold.

She is the first woman in history to successfully defend a javelin world title.

On an historic day of athletics, Barber, the reigning world champion and Olympic bronze medallist from Tokyo, launched 66.91 metres with her third throw to step in the gold medal position, which she did not relinquish to become the 11th Australian track and field world champion. 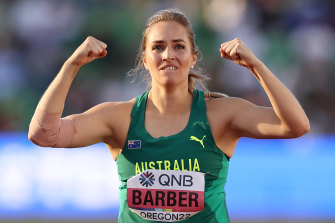 Barber’s gold puts Australia on track to deliver their greatest medal haul at a world athletics championships, after Nina Kennedy began the fortnight by winning bronze in the pole vault, and Eleanor Patterson delivered gold in the high jump in Eugene, Oregon.

Australia’s best effort at a world championships was 2009 when they won two gold and two bronze medals. 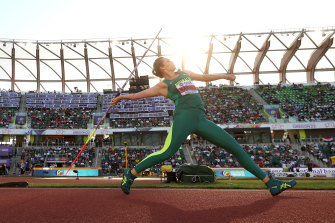 Kelsey-Lee Barber in action during the javelin final in Oregon.Credit:Getty Images

Peter Bol runs in the 800m final on Sunday, while Tokyo bronze medallist Ash Moloney also begins the decathlon, where he hopes to again be on the dais by Monday afternoon.

With her third round throw Barber literally put her stake in the ground and no one could get near her.

It looked like Australia could have two women on the dais with Mackenzie Little in the medal position until the final round, but she was pushed back to fifth place.

Little, a 25-year-old medical student from Sydney who was a finalist at the Tokyo Olympics last year, opened the competition with the throw of her life. When it mattered Little threw big. 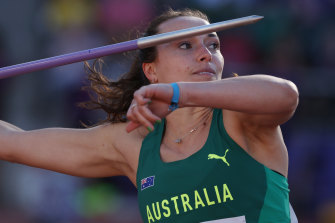 She set the standard with a stunning opening throw of 63.22m, the biggest of her life right when she needed it. That put her in the lead for several rounds.

Barber responded with a solid 62.67m for her first effort and raised the idea of Australia taking a first-ever gold and silver in the one event at a world athletics championships.

For Barber, it was a welcome change from her recent championships victories where she left it all to the clutch moment to deliver her best. In Tokyo, when she won silver, and in Doha, with her gold throw, it was her final throws that won medals. Here, she began solidly and built from there.

She threw biggest with her third throw and allowed herself the chance to rest and pass on further throws, confident that she had done enough.

Little struggled in qualifying with a modest 59m throw, leaving her waiting to find out if she was able to qualify for the final.