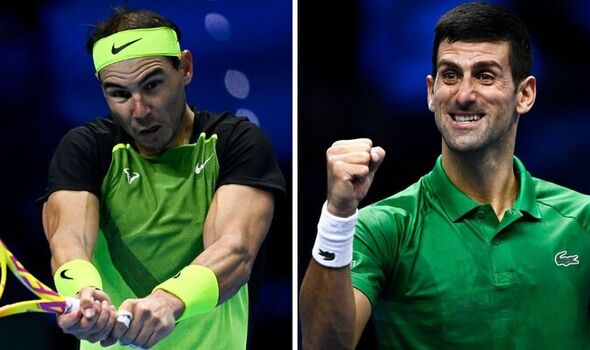 Rafael Nadal’s coach has picked Novak Djokovic to win the ATP Finals after the long-time rivals avoided a showdown in Turin after being drawn in opposing groups, with the Spanaird failing to get out of the round-robin stage. Djokovic has already won his group after playing just two matches and is through to the semi-final for the third straight year as he bids to win a sixth title at the ATP Finals.

Nadal’s 2022 season came to an end on Thursday as he played his final match in the group stage of the ATP Finals against Casper Ruud, winning 7-5 7-5. The world No 2 had already been eliminated earlier in the week while the Norwegian was already confirmed as the group winner but Nadal managed to snap his four-match losing streak and pick up 200 ranking points to end the year.

By failing to make it out of the group stage, Nadal also denied fans the opportunity to watch him face Djokovic for a second time this season after both men were drawn in opposing groups, meaning their only chance of playing was if they both made it to face off in a potential semi-final or final. But it may be good news for the 36-year-old that he managed to avoid the Serb, as his coach has confessed that Djokovic looks better than the rest of the field in Turin this week.

“I think that Djokovic from what I have seen is the one who is playing the best, but anything can happen,” Carlos Moya told Marca, predicting his winner of the season-ending tournament. “At the moment, he is the one that I see a little above the others.”

JUST IN: Casper Ruud agrees with Roddick in Alcaraz and Djokovic debate

Djokovic is bidding to win a record-equalling sixth ATP Finals title this week, which would put him level with Roger Federer. The world No 8 won his first title at the season-ending championships back in 2008 before winning four in a row from 2012 to 2015, but has not been able to capture the trophy since.

As for Nadal, the ATP Finals is one of the few big titles the 36-year-old has never been able to win and his chances of winning the season-ending championships before the end of his career became slimmer as he was knocked out after losing the first two matches of the round-robin stage. But Moya was glad to see his charge make an improvement by winning his final match of the week.

“Ending up winning is not bad even though it was known that nothing was at stake,” the former world No 1-turned-coach said. “Rafa has shown his face and has played the best game of the week. He has gone from less to more throughout the week.”

But Nadal’s coach admitted that it still wasn’t the week they would have hoped for despite being just his second tournament since the US Open, as he failed to translate his progres in training to the match court. Moya added: “At certain times he could have changed things, with the break points… It has not been the tournament we expected.

“Yes, it has cost him in the matches and it is something that is not usual for him. We arrived last Tuesday and he has made sets and the game had been good and well adapted to what the surface is. Putting it into practice in the matches is which has cost him a little more.”