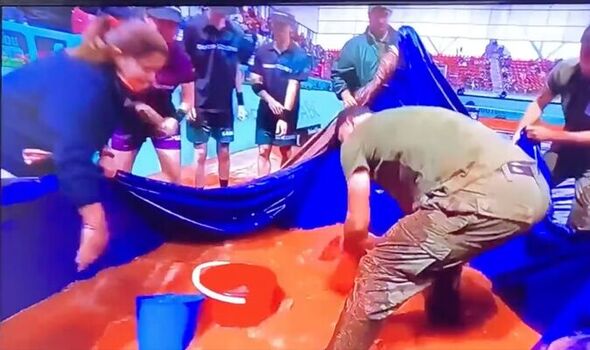 There were bizarre scenes at the Madrid Open on Monday afternoon after one of the tennis courts flooded in the Spanish capital – with members of staff forced to remove the standing water with buckets as the crowd looked on in disbelief.

As rain poured down in Madrid, organisers at the prestigious tournament made the decision to put a cover over the Arantxa Sanchez court hosting the match between Ons Jabeur and Belinda Bencic to catch any rain that fell. That worked a charm, although the heavy rain meant that the cover was slowly collecting too much and eventually standing water became a real problem.

Workers at the tournament were unsure how to remove the water and had to aim to do so without any spilling on the court amidst the continuously pouring rain. There was no modern technology to utilise, thus leaving everyone bamboozled as to what to do.

And the decision was made to simply pick up the water to stop it from stagnating, with various members of staff putting in their efforts to resume the match. Rain is not expected to stop until at least 6pm in Madrid, meaning that the incident could continue for some time and continue to delay proceedings.

And ex-tennis star Annabel Croft believed the incident reminded her of a “kiddies swimming pool”, such was the volume of water on the court. “Oh my goodness, that looks like a kiddies swimming pool, that would be quite fun for the kids to splash about it,” Croft said.

“That is extraordinary. I have never seen anything like that. It is like they are bailing out a rowing boat. I think they need a pump, they have gone to the old fashioned buckets. But wow, that is quite extraordinary.”

Elsewhere presenter Caroline Whittaker jokingly hit out at tournament organisers for not having the technology to deal with the situation. “That is over on the Arantxa Sanchez court Annabel, so I would say we are in the right place,” Whittaker said.

“Tennis never ceases to be low tech in these situations. Tennis responds to rain with towels, squeegees and buckets.” Eventually, someone came on with a wheelbarrow of clay and scattered it around the ground to replace the losses caused by the downpour.

And Croft was skeptical of whether that would be a benefit for the two players. “That is going to slow the court right down. The conditions that the players have just got used to, that is going to change it quite dramatically,” Croft said.

“It is going to feel a lot heavier, a lot slower. Just changing the conditions completely. It’s quite extraordinary scenes and conditions on that court.”