Clown prince to top Dog? Addo-Carr puts hand up to lead from the flank

Josh Addo-Carr will put his hand up to lead Canterbury as one of rugby league’s rarities: a club captain calling the shots from the wing.

Former Bulldogs premiership-winning star and coach Chris Anderson is one of the game’s best-known captains from the flank, leading Canterbury in 1983 and 1984 before he was dropped leading into an eventual grand final win over Parramatta.

An argument can be mounted that, like Anderson, Addo-Carr’s regular Test and Origin appearances make for the best credentials of Canterbury’s current captaincy options.

Australian coach Mal Meninga lauded the 27-year-old’s development as a leader alongside great mate before Latrell Mitchell flying out for the World Cup, while no other Bulldog can match the two premierships and 13 finals games Addo-Carr arrived with from Melbourne. 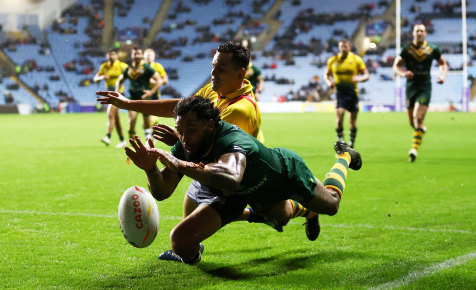 Josh Addo-Carr has been among the Kangaroos best so far at the World Cup.Credit:Getty

He and Thompson stood in as co-captains in April when Jackson was injured, sparking a rare win over the Roosters before Addo-Carr handled his NSW Origin snubbing by rediscovering his best football in the back half of 2022.

“If everyone wants me to do it at the Bulldogs, if the boys trust me, I’ll definitely put my hand up,” Addo-Carr said in Manchester ahead of Australia’s quarter-final clash with Lebanon.

“But I think it’s got to be earned. I haven’t thought too far ahead, I think Matty Burton might get it.”

Addo-Carr’s larger-than-life approach and blistering speed has long belied the work ethic and temperament honed by Craig Bellamy at Melbourne, though the suggestion of skippering from the wing was met with his usual cackle and a quip. 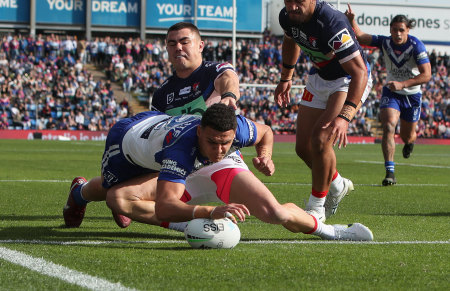 Bulldogs flyer Jacob Kiraz will come up against Addo-Carr when Lebanon and Australia clash in their World Cup qualifier.Credit:Getty

“Trying to scream to the ref from the wing, I don’t think he’ll hear me,” Addo-Carr laughed, acknowledging quickly if there’s one winger loud enough to be heard anywhere on the paddock, it’s him.

“Everyone sees me as a player always laughing but when it’s time to party on game day I put my best foot forward. I just see the fun side of things more than others I suppose.

“But when it’s go time on the weekend I try to do my job the very best I can. I’ve always been like that.”

Addo-Carr paid tribute to Jackson’s influence as “the heart and soul of the Bulldogs” and “one of the hardest, most professional footy players I’ve ever seen.”

His move to Canterbury came with a touted move to fullback which is yet to eventuate, and was laughed off once more in Kangaroos camp when asked if he would mention the No.1 jersey to Ciraldo as well.

The Australian flyer was more than happy to talk up the credentials of Bulldogs rookie of the year and Lebanon opponent Jacob Kiraz, who is also eyeing off the custodian role at Belmore.

“He’s a fantastic player and a fantastic kid as well. I remember when he came to the Bulldogs, he’d just left Newcastle at the start of the pre-season when I got there,” Addo-Carr said.

“There was just something about him when he walked in the door, I just knew that he was going to be a superstar. He had a fantastic season this year and did some amazing things for us. He’s got a very bright future in the NRL.”