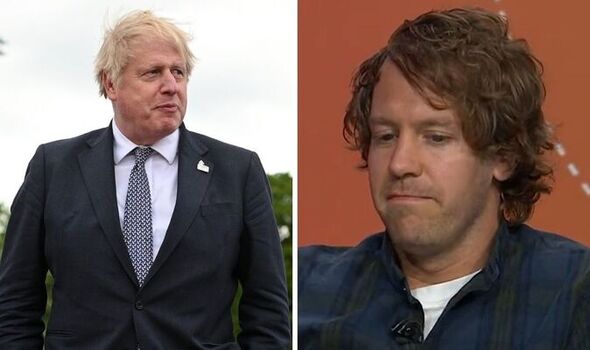 Sebastian Vettel has called out Boris Johnson for breaking the very laws that he created for the British public over the ‘partygate’ scandal. The Metropolitan Police issued a fresh update on their investigation into Downing Street where the number of fines handed out to government staff for law-breaking parties during the Covid-19 pandemic had passed 100.

Their investigation is centred around events held in Downing Street and Whitehall and remains ongoing. Johnson was not said to be among those sanctioned in the latest round of fines with the prime minister receiving one fixed penalty notice.

He’s been issued with a £50 fine in relation to a birthday party at No 10, but reports have suggested he may have attended five other events. Labour leader Keir Starmer is also at the centre of a police investigation on ‘beergate’ with the 59-year-old insisting he will resign if found guilty.

The whole situation has dominated the news in recent weeks and four-time F1 champion Vettel has been keeping tabs on everything. The Aston Martin driver has used his platform as a global sports star to try and raise awareness on a number of topics.

Just last weekend at the Miami Grand Prix, Vettel wore a t-shirt highlighting the dangers of climate change if global warming fears are not addressed. Speaking on ‘partygate’, Vettel admitted that “we all do mistakes”, but feels Johnson should have known better given his position.

“When you are in that position there are certain things that you just can’t pull off,” Vettel said on BBC Question Time. “In the end, it is the prime minister who made the law and then breaks the law.

“I’m just thinking, I’m a father of three kids and I’m trying to explain them something that I think is really important on how to behave and I do the exact opposite, what do you think they will make of it? I’m the least credible person in front of them then.

“We all do mistakes. We’re all human but there’s just certain things that I think come with that office that you can’t do.”

As well as highlighting global warming issues, Vettel has also used his platform to fight for environmental and social change. After last year’s British Grand Prix, he spent three hours with other volunteers picking up litter around the grandstands before visiting a recycling centre near London.

And later in the season, Vettel opened an air capture and storage plant in Iceland.