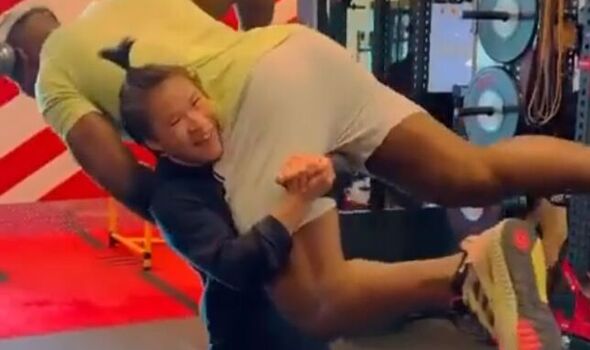 Former UFC strawweight women’s champion Zhang Weili has shown off her incredible strength as she lifted 293lb heavyweight champion Francis Ngannou off of his feet seemingly with absolute ease. The two had been training in the same gym ahead of their return to the UFC, with Weili fighting at UFC 281 next weekend (November 12) as she faces Carla Esparza for the title.

Ngannou shared the video and tweeted: “I can’t believe that @zhangweilimma just picked me up like I wasn’t 293lbs.I didn’t want her to do it I was scared of her hurting her back and was trying to explain this to her… then found myself suddenly up in the air. Her strength ratio is through the roof.”

Ngannou usually fights at the heavyweight limit of 265lbs, but is said to walk around much heavier than that, cutting weight in order to fight in the UFC. The Cameroonian is currently out of action after tearing his MCL and damaging his ACL in preparations for his fight with Ciryl Gane.

Somehow, Ngannou won the fight despite having the major knee injuries, but required surgery which will keep him out for 12 months, as he’s expected to return in the coming months. That’s if he is to remain in the UFC, though, with his contract situation still up in the air, as he’s stipulated to defend his belt one more time before becoming a free agent.

Ngannou has been linked with a blockbuster clash with Jon Jones, who has moved up to the heavyweight division after dominating the light heavyweight roster throughout his 12 years in the UFC, but has not fought since 2020.

Jones was reportedly set to fight Stipe Miocic at UFC 282, but now looks to be facing the champion Ngannou in the first quarter of 2023.

Weili, meanwhile, will get another shot at the women’s strawweight tight next weekend when she faces Esparza.

Esparza won the title against Rose Namajunas, who is the only woman to defeat Weili. Esparza’s victory over Namajunas was roundly criticised as one of the most boring fights in UFC history with both dealing little damage to one another in an uneventful match-up between the two.

UFC 281 will also Israel Adesanya defend his middleweight belt against long-term rival Alex Pereira, who remains the only man to knock Adesanya out in his combat sports career, landing a huge left hook against him in a 2017 kickboxing matchup.