Conor McGregor and Donald Cerrone entered the octagon for the main event at UFC 246 in Las Vegas. However, just 40 seconds later, the referee was waving off the fight as McGregor sealed the win.

The Irishman was quick out of the blocks, landing a strong left hand on Cerrone.

He then connected with a series of shoulders to the face before rocking the American with a huge head kick.

McGregor’s win was sealed after another barrage of hits took Cerrone to the canvas.

“One of the records he holds [is] the most head-kick knockouts,” the Dublin star said afterwards. 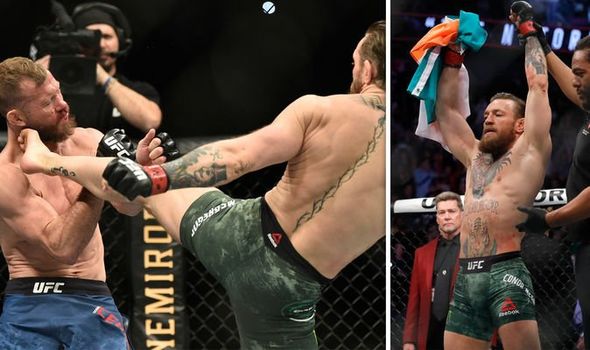 “I’m so happy to be able to get him down with a head kick myself. So I’m very happy and proud tonight.”

Despite ending in the fight in just 40 seconds, McGregor claims he could have finished the job even sooner.

“It could have been stopped earlier,” he said.

“But I had to concentrate myself. And John [Kavanagh] told me to settle and pick my shots.

“I did that. And that is when I got him. So I will celebrate tonight and spend some time with my family and then get back to training.”