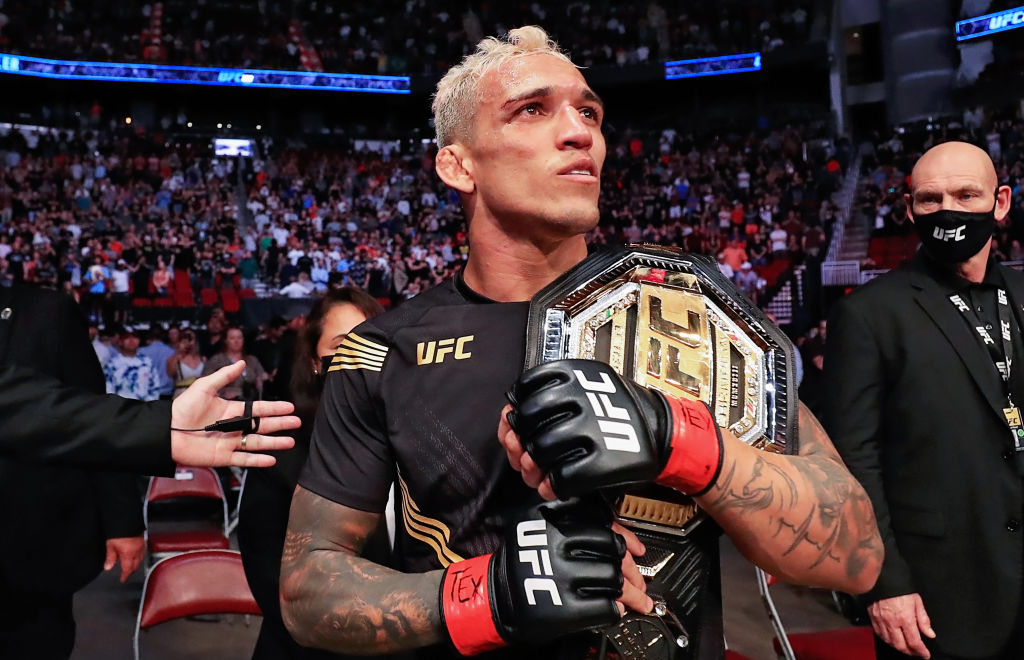 Charles Oliveira won the UFC lightweight title in spectacular fashion on Saturday night and has immediately promised to deal with Conor McGregor, if the Notorious can get past Dustin Poirier in their trilogy fight this summer.

Oliveira stopped Michael Chandler in the second round of their UFC 262 main event, recovering from a tough opening stanza by catching the American with a left hand, dropping him and following up with further blows.

The referee stepped in and the Brazilian became the first undisputed champion since Khabib Nurmagomedov retired and relinquished the belt.

McGregor has a third fight with Poirier coming up in July and must win that to have a chance of a bout with Oliveira, but he is already thinking about it.

The Irishman tweeted, giving a nod to his Proper Twelve whiskey brand: ‘Congrats to Oliveira on becoming the 11th UFC lightweight champion. Wonder who Twelve is…’

‘Conor, worry about Dustin,’ Oliveira said through an interpreter. ‘Conor, since you’re so tough: First of all, you beat Dustin, and then you come over to Brazil and I’m going to put you on your ass.

‘First he’s got to get past Dustin. He’s one of these guys that just talks a lot. He’s got to beat Dustin first.’

McGregor was stopped by Poirier in the second round of their UFC 257 main event in January, levelling their record at 1-1 after the Notorious beat the Diamond back in 2014.

The winner will be in line to take on Oliveira later in the year.

The new champion hailed his vanquished foe in Houston, Texas and will leave his next opponent up to his mannagement.

‘I knew it was going to be difficult,’ Do Bronx said. ‘He’s the cream of the crop. They brought Michael Chandler here [from Bellator] to win. But I knew if it was in the strike department, I could strike with him, and I knew if it went down I would use my jiu-jitsu.

‘I battled hard to get here. Everyone’s talking about who it’s going to be next – Poirier or Conor. I’ll leave that my manager, and I’m going to go home and rest.’