German Tatjana Maria continued her dream Wimbledon run when she fought from a set down and saved two match points to beat former French Open champion Jelena Ostapenko 5-7, 7-5, 7-5 on Sunday to reach the quarter-finals of a grand slam for the first time. 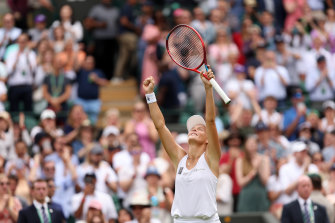 Maria – a mother of two who returned to action from maternity leave just under a year ago – was ranked outside the top 250 in March. She said the victory was especially sweet given her breaks from the game.

“It makes me so proud to be a mum, that’s the best feeling in the world,” she said in an on-court interview. “I love my two kids … [and] to be able to do this together … it makes it really special.”

Maria made a solid start as 25-year-old Ostapenko, who reached the semi-finals at the grasscourt major a year after her maiden grand slam title at Roland Garros in 2017, surrendered her serve early to trail 1-3.

But the Latvian immediately regained her composure to level the scores before switching gears to go ahead 6-5 and take the first set after world number 103 Maria made unforced errors on crucial points.

Maria, at 34 the oldest player left in the women’s draw, had impressed in her stunning straight sets-victory over fifth seed Maria Sakkari in the previous round and she hit back from 1-4 down in the next set before forcing a decider.

Having saved two match points in the second set at 4-5 and with the crowd firmly behind her, Maria capitalised on a mistake from 12th seed Ostapenko to go up 6-5 in a see-saw third set before sealing the match on serve.

Elsewhere, up-and-coming Niemeier knocked Watson out 6-2, 6-4 on Sunday and later apologised for disappointing the crowd by beating a home favourite.

Niemeier, 22, used her big serve and skilled net play to great effect, appearing completely at ease despite the Centre Court crowd’s clear support for Watson, who looked tight and anxious. 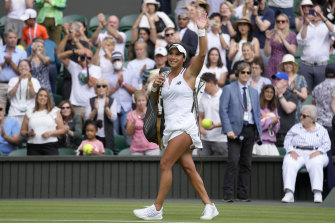 It was the end of the line for home favourite Heather Watson.Credit:AP

Playing after Wimbledon staged a centre court centenary celebration that included a parade of former champions, Niemeier was quickly into her stride, breaking 30-year-old Watson’s serve twice to win the first set.

Watson, playing the fourth round of a grand slam for the first time in 42 attempts, found some rhythm in the second set but, after she served two double faults and was broken in the seventh game, Niemeier’s stranglehold was complete.

The German, ranked 97 and playing at only her second grand slam tournament, reached the quarter-finals on her third match point when Watson put a forehand into the net.

The Dortmund-born player said she was proud to have won a match on centre court but had been too nervous to watch the centenary show beforehand. 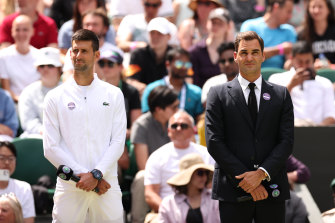 Novak Djokovic and Roger Federer during the centenary celebration on centre court on Sunday.Credit:Getty Images

Federer’s suggestion he might compete next year drew a huge cheer as did the arrival of home winner Andy Murray and six times champion Billie-Jean King.

Before the champions trooped on court in the sunshine, 81-year-old singer Cliff Richard reprised his 1963 hit Summer Holiday from the stands, as he had done to entertain the crowd during a rain-soaked day in 1996 – before the stadium had a roof.