Britain’s Kyle Edmund cried with tears of joy on the court after securing a maiden ATP title against Gael Monfils at the European Open in Antwerp.

“A lot of hard work goes into this, it’s just the emotion of it,” Edmund told BBC Sport.

“It’s a great feeling, just overall the bigger picture is the overriding emotion, like so many years putting in the work, on and off the court.”

It was only Edmund’s second final, having lost 6-2 6-2 to Spain’s Pablo Andujar at the Grand Prix Hassan II in Marrakesh in April.

He was 3-0 down after barely seven minutes of play against Monfils but fought back impressively to take charge of the second set tie-break.

Edmund held off two break points at the start of the deciding set before sealing the title with his first match point, prompting tears of jubilation. 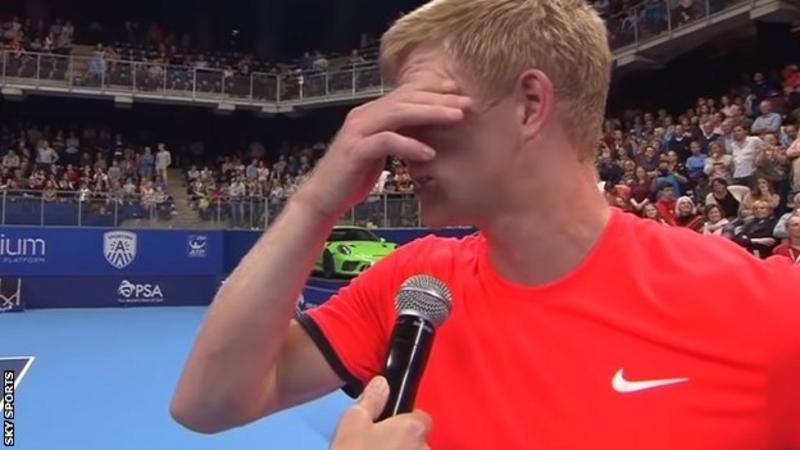 “It fills you with confidence and belief, and next time you’re in that similar situation you have an experience to look back on and see how you reacted,” he added.

“That feeling is a positive one and it will definitely help me moving forwards for the future.

“The goal is always to be consistent, regardless of the result today I would’ve always said that.

“If you want to go up the rankings, consistency is always key.”

Meanwhile, at the Kremlin Cup in Moscow, Russian Karen Khachanov, world ranked 26, secured his third title with a 6-2 6-2 win over Frenchman Adrian Mannarino, the world number 49.

The third seed needed only 54 minutes to complete victory.

And at the Stockholm Open, 20-year-old Stefanos Tsitsipas, the world number 16, became the first Greek player to win an ATP title, beating Latvia’s Ernests Gulbis 6-4 6-4 in an hour and 21 minutes.

I think it is a very important step; he has made significant progress this year already, reaching a Grand Slam semi-final in the Australian Open at the start of the year and getting himself inside the world’s top 20.

But he has been trying to get his first ATP title on the board throughout that period and had not been able to do it – so this is a major step for him.

He is 23 and had already had a great year, but this really caps it off and tells him he can do it.

He did it the hard way, from behind, and won two tie-breaks against a player who has been to Grand Slam finals himself. It was a very emotional Edmund at the end – it really was quite a sight.

In his career, rather than a big splash he just dips his toe in and makes gradual process and eventually gets where he wants to go.

I think incrementally he will get there – he’s that kind of player. In his forehand he has one of the great weapons in the sport.